The Numbers Guy went on vacation

Carl Bialik used to be the Numbers Guy at Wall Street Journal - he's now with FiveThirtyEight. Apparently, he left a huge void. John Eppley sent me to this set of charts via Twitter.

This chart about Citibike is very disappointing. 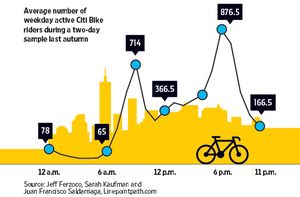 Using the Trifecta checkup, I first notice that it addresses a stale question and produces a stale answer. The caption below the chart says "the peak times ... seem to be around 9 am and 6 pm." What a shock!

I sense a degree of meekness in usnig "seem to be". There is not much to inspire confidence in the data: rather than the full statistics which you'd think someone at Citibike has, the chart is based on "a two-day sample last autumn". The number of days is less concerning than the question of whether those two autumn days are representative of the year. Curious readers might want to know what data was collected, how it was collected, and the sample size.

Finally, the graph makes a mess of the data. While the black line appears to be data-rich, it is not. In fact, the blue dots might as well be randomly scattered and connected. As you can see from the annotations below, the scale of the chart makes no sense. 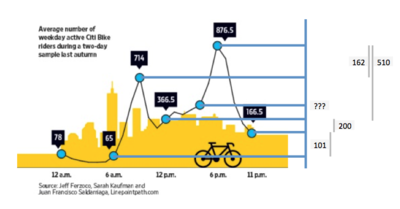 Plus, the execution is sloppy, with a missing data label.

The next chart is not much better. 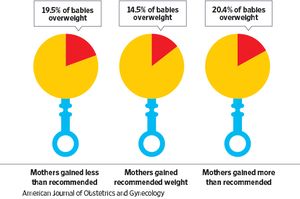 The biggest howler is the choice of pie charts to illustrate three numbers that are not that different.

But I have to say the chart raises more questions than it answers. I am not an expert in pregnancy but doesn't a pregnant woman's weight include the weight of the baby she's carrying? So the more weight the woman gains, on average, the heavier is her baby. What a shock!

The last and maybe the least is this chart about basketball players in the playoff. 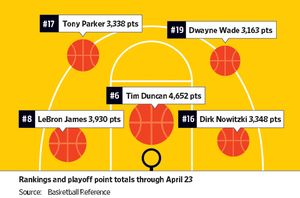 It's the dreaded bubble chart. The players are arranged in a perplexing order. I wonder if there is a natural numbering system for basketball positions (center = #1, etc.), like there is in soccer. Even if there is such a natural numbering system, I still question the decision to confound that system with a complicated ranking of current-year playoff players against all-time players.

Above all, the question being asked is uninteresting, and so the chart is uninformative. A more interesting question to me is whether the best players are playing in this year's playoff. To answer this question, the designer should be comparing only currently active players, and showing the all-time ranks of those players who are playing in the playoffs versus those who aren't.

The point you missed from the baby chart is that the baby was more likely to be overweight from mothers who gained both more and less than the recommended amount. Also, weight gain during pregnancy is higher and has much higher variance than the weight of the baby itself.

That Kaiser missed the point of the data is pretty much the point about how bad the chart is...

The basketball chart shows the typical spot on the floor for each position. It's standard convention in basketball circles and I had no problem understanding it.

The graphic of the city behind the first line chart seems like a terrible design choice to me - at first glance I assumed the skyline was supposed to be graphing something else.