Law of small numbers, in action

Loyal reader John M. expressed dismay over Twitter about 538's excessive use of bubble charts. Here's the picture that pushed John over the edge: 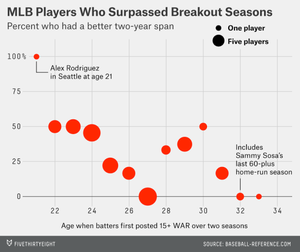 The associated article is here.

The question on the table is motivated by the extraordinary performance of a young baseball player Mike Trout. The early success can be interpreted either as evidence of future potential or as evidence of a future drought. As an analogy, someone wins a lottery. You can argue that the odds are so low that winning again is impossible. Or you can argue that winning once indicates that this person is "lucky" and lucky people might win again.

The chart shows the proportion of players who performed even better after the initial success, given the age at which they first broke out. One way to read this chart is to mentally replace the bubbles with dots (or columns), and then interpret the size of the bubbles as the statistical significance of the corresponding probability estimate. The legend says number of players, which is the sample size, which governs the error bar associated with that particular number.

This bubble chart is no different from others: it is impossible to judge the relative sizes of bubbles. Even though the legend provides us two reference points (a nice enough idea on its own), it is still impossible to know, for example, what proportion of players did better later in life when they first peaked at age 24. The bubble for age 23 looks like it's exactly five players but I still cannot figure out how many players the adjacent bubble represents.

The designer should have just replaced each bubble with an error bar, and the chart is instantly more readable. (I have another version of this at the end of the post.)

The rest of the design elements are clean and well-done, particularly use of notes to point out interesting aspects of the data.

From a Trifecta checkup perspective, I am uncertain about how the nature of the data used to investigate the interesting question posed above.

Readers should note the concept of "early success" and "later success" are not universally defined. The author here selects two proxies. Reaching an early peak is equated to "batters first posting 15+ WAR over two seasons". Next, reversion to the mean is defined as not having a better two-year span subsequent to the aforementioned early peak.

Why two seasons? Why WAR and not a different metric? Why 15 as the cutoff? These are all design decisions made while working with the data.

One can make reasonable arguments to justify the above two questions. A bigger head-scratcher relates to the horizontal axis, which identifies the first time a player reaches his "early peak," as defined above. The way the above chart is set up, it is almost preordained to exhibit a negative slope. The older the player is when he reaches the first peak, the fewer years left in his playing career to try to emulate or surpass that feat.

This last point is nicely illustrated in the next chart of the article: 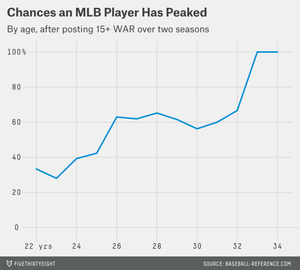 This chart is excellent on many levels. It's not clear, though, whether it says anything other than aging.

Near the end of the post, the author rightfully pointed out that "there’s not really enough data to demonstrate this effect". Going back to the first chart, it appears that no single bubble contains a double-digit count of players. So every sample size is between one and, say, seven. We should be wary of conclusions based on so little data.

It's always fun to find examples of the Law of Small Numbers, courtesy of Kahneman & Tversky.

Here is a sketch of how I might re-make the first chart (I made up data; see the note below).

While making this chart, I realize another issue with the original bubble chart. When the proportion of players improving on their early peak is zero percent, how many players did not make it is quite hidden. In the revised chart, this data is clearly seen (look at age 22).

Note: I wonder if I totally missed the point of the original chart.... I actually had trouble eyeballing the data so I ended up making up numbers. The bubble at age 22 looks like it should stand for 5 players and yet it sits at precisely 50%, which would map to 2.5 players. If I assume the 22 bubble to be 4 players, then I don't know what the 26 bubble is. If it is 4 players also, then the minimum non-zero proportion should have been 1/4, but the bubble clearly lies below 25%. If it is 3 players, the minimum non-zero proportion is 1/3, which should be at 33%.

I think the bubble size on the original chart is proportional to the number of players who did surpass their "breakout". So the 22 bubble is "5 out of 10" and sits at 50%, while the 25 bubble is something like "5 out of 25" and sits around 20%.

I find the original chart to be incredibly confusing. I'm reading "Percent who had a better two-year span" over and over again, it's all a blur to me. For me (but maybe not for the average audience), I'd rather just see a bunch of line plots, showing the trajectory of WAR for each player. I feel like I'm staring at the bubble plot trying to deduce what the underlying trajectories were, but then why not just show the trajectories? In this case, I wonder if it's missing the point to be tinkering with the graph that was displayed.

Jakub: your interpretation makes more sense but then the legend is very unclear!

Andrew: You're absolutely right. That's why I pushed a chart re-do to the bottom of the page :) I wonder why he didn't just analyze the WAR trajectories as you said. If he did that, he will notice things like survivorship bias, and tenure bias. My understanding though is that this type of thinking is at the core of sabermetrics, just treat everything as probability estimates at some level of aggregation.

I Strongly AGREE With this statement:
This bubble chart is no different from others: it is impossible to judge the relative sizes of bubbles. Even though the legend provides us two reference points (a nice enough idea on its own), it is still impossible to know, for example, what proportion of players did better later in life when they first peaked at age 24. The bubble for age 23 looks like it's exactly five players but I still cannot figure out how many players the adjacent bubble represents.