A promising infographic about motorcycle helmets

The New York Times graphics team shows us how to do infographics poster the right way. They recently put up a feature showing how the repeal of helmet laws is linked to increasing vehicle fatalities. The graphic is here.

One of the key charts is this one (second to last screen): 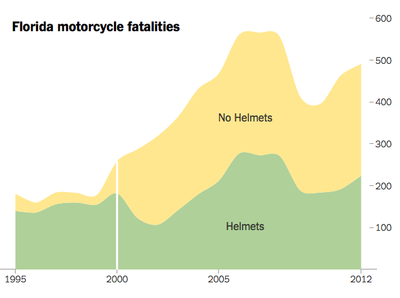 The graphic tells the story, no additional words are needed. (Actually, you'd have to come from the prior page to know that the white vertical line represented the year in which Florida repealed its helmet law.)

Of course, one state does not prove a trend. It appears that other states face the same situation. It would be nicer if they could start this next chart at an earlier time.

I'm surprised by how much these lines fluctuate given that the raw counts are in the hundreds.

I wonder if there is any active debate in Florida or elsewhere as it would appear that the helmet law repeal may have caused hundreds of unnecessary deaths. Have people been coming up with other explanations for the sharp rise in motorcycle fatalities involving those not wearing helmets?

My first thought with both of these chart is - what has happened to the number of motorcycle riders during the same time period?

Has the number/percentage of people on the road on a motorcycle increased dramatically as well? Or can we really chalk this up to the effect of the law change?

Also, for the people who were killed while not wearing a helmet - how many of those cases would a helmet have saved? That's a much harder number to get, I am sure...

I'd attribute the fluctuation to motorcycle riding being a very seasonal activity. At least when done for pleasure.

NYT missed a real opportunity here to show that "No Helmets" deaths are static. They should flip those 2 data trends so more fluctuating (point of the article) "Helmets" is on top.

Wow!! That was really informative post. Worth sharing!! I would like to re-publish this article in my personal blog. Obviously I will give credit to your website. Is that Okay?

Hope this really informative chart will motivate at least some careless bikers to wear motorcycle helmet whilst riding.

This info-graphic clearly shows that those people who don't wear helmets while riding bike are more prone to vehicle accidents and deaths.

we should wear helmet while riding motor bike. keep yourself safe from accident.

There's no doubt that these helmets has some staying electricity, especially with the increased center on head injuries not just for in baseball, nonetheless throughout sports. They can be rather cumbersome at this moment, but will eventually be lightweight, and players will want the protection. The prevalence with elbow pads is actually a testament to the following. As the know-how develops to hone protective gear that won't intrude upon players' routines, such items will stay.

I remember reading some years ago (NYT, conceivably? ) that catchers expert brain contusions never unlike, but not as severe when, football players. I recognize Cervelli's injury occurred along at the plate, but I aren't able to help but reckon that more protective helmets is going to impact catchers defensively and players offensively.

Yeap, It's true. The repeal of helmet laws will cause the increasing of the vehicle fatalities. Great sharing, thanks for posting!

This really informative chart will inspire at least some careless bikers to wear motorcycle helmet even as riding. Great Sharing Thanks for Posting