Junk Charts
Welcome Twitter About Book Blog RSS
Nothing to see here
Spatial perception: on the chart and in real life

My twitter followers have been sending in several howlers.

Twitter (link) made a bunch of bold claims about its own influence by using the number of tweets about the Oscars as fodder. They also adopt the euphenism common to the digital marketing universe, the so-called "view", which credit to them, they define as "how many times tweets are displayed to users". Yes, you read that right, displaying is the same as viewing in this world - and Twitter is just a follower not a trend setter here.

For @dtellom, it is this bubble chart about the Ellen tweet that displeased him: 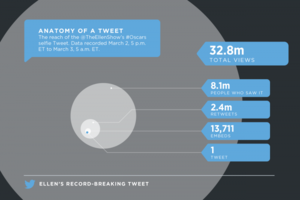 In the meantime, @wilte found this unfortunate donut chart, created by PWC in the Netherlands. 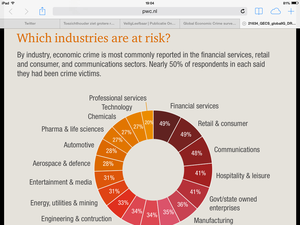 Both designers basically used appropriated a graphical form and deprived it of data. In one, the designer threw the concept of scale to the wind. In the other, the designer dumped the law of total probability. In either case, the fundamental rationale for the particular graphical form is sacrificed.

Both are examples that fail our self-sufficiency test. This test says if a visual display cannot be understood unless the entire data set is printed on the chart, then why create a visual display? In both charts, if you block out the numbers, you are left with nothing!

The PWC chart was submitted by @graphomate, who also submitted the following KPMG chart: 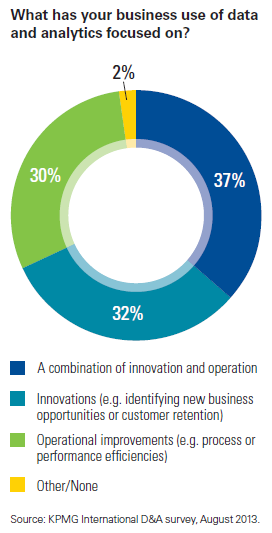 The complaint was the total adding up to 101%. I'm not really bothered by this as it is a rounding issue. That said, I like to "hide" such rounding issues. I have never understood why it is necessary to display the imperfection. Flip a coin and remove the decimals from one of the categories!

The worst thing about the KPMG graphic is the color choice. If they'd made the dark blue Innovations, then the teal would be a visual metaphor for the combination. Instead they made dark blue stand for a combination of green and teal - makes no sense.

The second worst thing is that with the portions so close (each is about a third) it's difficult to get any information out of the visual of the circle at a glance.

Then there's the banality of the apparent question asked.

The least significant bad thing about it is the percentages not adding up to 100.

I'm glad to learn I'm not the only one flipping a coin and deleting the 1%!