Spatial perception: on the chart and in real life 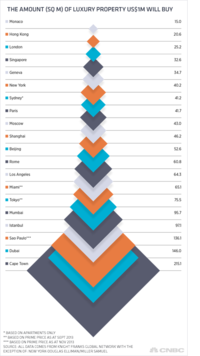 A twitter follower @mdjoner felt that something is amiss with the squares in this chart comparing real estate prices in major cities around the world. I'm not sure where the chart originally came from but there is a CNBC icon.

There is one thing I really like about the chart, which is the metric that has been selected. The original data is likely to be price per square metre for luxury property in various places. The designer turned this around and computed the size of what you can buy assuming you spend $1 million. I think we have a better ability to judge areas than dollars.

The notion of floor area meshes well with the area on a chart, so there is an intuitive appeal as well.

So in the Trifecta checkup, they did well posing an interesting question, and picking some data. But like Mike, I'm not excited about the graphical construct.

There are a few problems with this chart:

Here is an alternative display of the data: 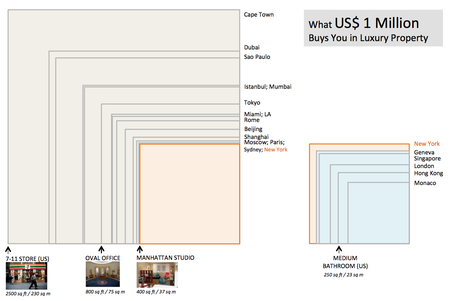 Also, along the bottom, I provide some clues to help people bridge the gap between the areas shown on the graphic, and real-life areas. For example, the orange square represents 400 square feet but without the annotation telling you it's about the size of a typical Manhattan studio, you may not know how to map the size of the orange square to your perception of real spaces. I also included images (although if I'm publishing this, I'd want better ones).

Finally, note that the data set did not show up on my version of the chart.

Nice presentation. The display is much improved over the original. However, wouldn't a simple horizontal bar chart serve the same purpose, while enabling you to determine the data values from the axis? A bar chart shows area, too!

The bigger problem with the original graphic is that the sides of the squares are scaled to the square meters of area, which distorts the reality. The new graphic scales areas (of the graphic squares) to areas (actual square meters purchased by $1M), which is the correct relationship.

I like the redesign. Most of all I love the context your annotations provide. I think it would be interesting to put those empty squares to use and put a floor plan on them -- especially if it's an online graphic/interactive and there aren't any layout space issues.

I do like the redesign. It obviously makes sense, for a change, to encode these values as areas.

I still think a regular bar chart gets the message across better though:

Even though the count in this data refers to area, it is still a count, and I would not encode the value as the actual area of the bar, as mentioned above.

I also like using the redesign to imagine a floor plan, which is an improvement on a bar graph. But the lack of a scale means I can't pencil in my own apartment. Was I ripped off? I don't know.

If the rectangles expanded along only one axis, you could estimate the differences in areas more easily. As it stands, you have to estimate two little slivers that aren't even the same area as each other.

Rick, jlbriggs: It's probably the case that the bar chart is better in conveying the data, especially for those who care about exact numbers. The challenge from a visualization design perspective, in my view, is to come up with alternatives that are more engaging but also retain the integrity of the data.

The key to my version of the chart are the real-world comparisons. A message such as "$1 million can only get you a bathroom in Hong Kong!" is powerful. Add to that, "and for the same $1 million, you get a studio in Manhattan." That's much more interesting than a more precise statement that city A is X times more expensive than city B. It goes back to what one is trying to accomplish with the chart.

Anthony: Like your idea of playing with floor plans. If there is more space, we don't even need to overlap the squares. We can reduce the number of cities represented and put them in a grid, and add floor plans. I suspect we'd end up changing the metric as well.

Kaiser - I don't disagree at all. I find that your design has novel insights that a bar chart won't, but I also find it a little difficult to actually compare the squares in that way.

It's engaging, but it also means that the user *must* engage in order to glean anything from the chart.

That's why I also included some of your extras in my bar chart version.

It's a great write up, and I think that the proposed change is terrific. I do have a question - why have you gone from the bottom right corner rather than the bottom left? This isn't a criticism; I'm just curious.

One observation that I'd make is that the areas don't actually need to be square, to my mind. That is, as long as the proportions remain the same, then rectangles are as comparable as squares (especially given the subject matter). The reason for which I mention this is that your design suffers where the data are very close to each other. Were you to use, say, international paper size proportions instead, then you'd have more room for data labels and more visible differentiation.

Incidentally, I just realised that this was originally posted more than a fortnight ago and that I am unfashionably late to the party. But hey, at least I've been keeping myself busy.