Jens M., a long-time reader, submits a good graphic! This small-multiples chart (via Quartz) compares the consumption of liquor from selected countries around the world, showing both the level of consumption and the change over time. 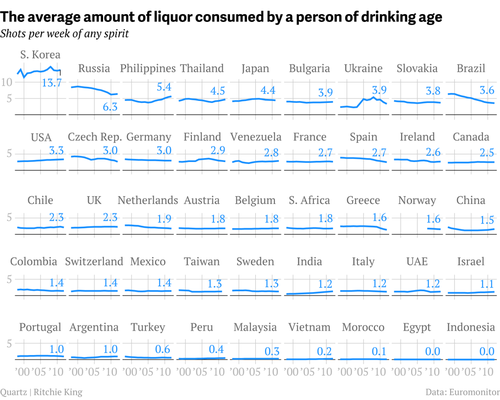 What they did right:

The nicest feature was the XL scale applied only to South Korea. This destroys the small-multiples principle but draws attention to the top left corner, where the designer wants our eyes to go. I would have used smaller fonts throughout.

Having done so much work to simplify the data and expose the patterns, it's time to look at whether we can add some complexity without going overboard. I'd suggest using a different color to draw attention to curves that are strangely shaped -- the Ukraine comes to mind, so does Brazil.

I'd also consider adding the top liquor in each country... the writeup made a big deal out of the fact that most of the drinking in South Korea is of Soju.

One way to appreciate the greatness of the chart is to look at alternatives.

Here, the Economist tries the lazy approach of using a map: (link)

For one thing, they have to give up the time dimension.

A variation is a cartogram in which the physical size and shape of countries are mapped to the underlying data. Here's one on Worldmapper (link):

One problem with this transformation is what to do with missing data.

Wikipedia has a better map with variations of one color (link):

The Atlantic realizes that populations are not evenly distributed on the map so instead of coloring countries, thay put bubbles on top of the map (link): 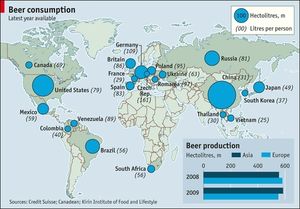 Unfortunately, they scaled the bubbles to the total consumption rather than the per-capita consumption. You guess it, China gets the biggest bubble and much larger than anywhere else but from a per-capita standpoint, China is behind many other countries depicted on the map.

PS. A note on submissions. I welcome submissions, especially if you have a good chart to offer. Please ping me if I don't reply within a few weeks. I may have just missed your email. Also, realize that submissions take even more time to research since it is likely in the area I have little knowledge about, and mostly because you sent it to me since you hope I'll research it. Sometimes I give up since it's taking too much time. If you ping me again, I'll let you know if I'm working on it.

The above does not apply to emails from people who are building traffic for their infographics.

PPS. Andrew Gelman chimes in with his take on small multiples.

I would love to see the WHO's data - which normalizes all alcohol, instead of just spirits - in the format of the Quarts chart.

Maps are often not a good choice for geo data.
http://www.youtube.com/watch?v=c6eUyxHGmJ4

I really like the fact that there are actually three different vertical axes, South Korea, the rest of the top row, then everywhere else. I had to deal with similar three different axes data when looking at homicide counts in US cities over time. I think it's a pretty typical problem in count based data.

The map attributed to The Atlantic belongs to The Economist, it was just reposted by the former.