Applying numbersense to a Bloomberg report

Overall, I love the spirit of Eric's article. He's using his numbersense, in this case by asking what the data series would look like if we look further back in time, and if we look at more granular data, and not be constrained by what the report (in this case, the Bloomberg reporter) shows us.

Here is the chart that appeared on Bloomberg, showing that the median income of American male workers has been in drastic decline over the last four decades across all age groups. 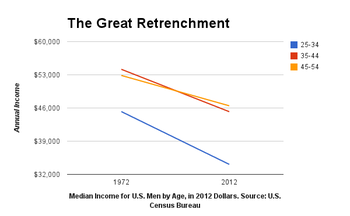 Here is Eric checking if the flat slopes captured the trends properly. Not quite: I am a big fan of taking out local fluctuations and straightening out curves but in this case, they went a bit too far. It would have been better if the red and orange lines on the Bloomberg chart were shown as flat from the 70s to the 90s, followed by a downward slope. Here is an example where getting rid of the gyrations cleans up the message (link).

Here is Eric taking the data back to the 40s: 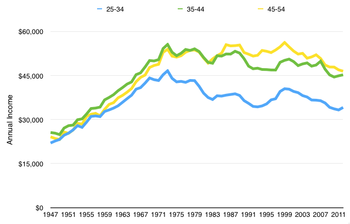 It's important to see that the reporter picked a point in time to avoid the strangeness of the kink in all those lines. I think only experts in this data can explain whether there was a change in metrics (even in the way inflation is computed since the data is adjusted for inflation) or whether there were other reasons for the abrupt reversal in trend.

Finally, Eric facetiously applied the line-straightening technique to the above chart and yielded the following: 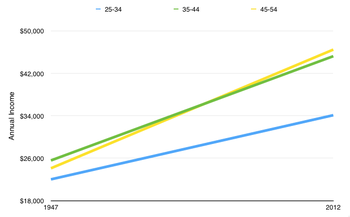 Of course, Eric's having some fun. My own feeling is that the reporter did fine to focus on the trend (from the 70s) that is definitely real and current, and leave the other question perhaps for another time.

At the end of the analysis, I don't think the key message has changed... in particular, in the 25-34 age group, the median income has suffered two waves of drastic declines, about 25% from 1972 to 1992 and then about 18% from 1999 to 2011. Recall from your intro stats class that the median metric is supposed to be stable; if the median shifts so drastically, it is a remarkable trend!

Eric also points out a missed opportunity. This observation is so stark it really should have been highlighted on the chart:

Another conclusion we might draw from this chart is that median incomes for men were somewhat volatile depending on what political party was in power. Incomes decreased under every U.S. Republican President except Reagan (where it went up), and increased under every Democratic President except Obama (it’s too early to tell based on this data). Bloomberg’s analysis didn’t take any of this into account.

Here is the link to Eric's post, it's definitely worth reading.

I know I'm late to the game here, but I believe the kink at 1972 is because of Nixon shock, the move to fiat currency. So maybe there was a good reason to start the chart there.