A message worth repeating

When you see two time series, resist the temptation to plot them as lines on the same chart. According to the Atlantic, the following dual-axis chart has been making the rounds in the investment community: (thanks to Alberto Cairo for the tip) 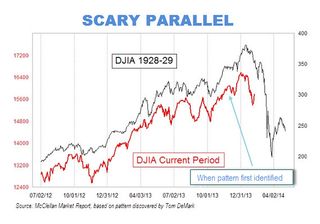 There may be correlation or there may not be. When we look at a chart like this and see "correlation" -- actually a high degree of correlation -- what we are really talking about are the long-run trends being correlated. For example, the underlying data for this chart is most likely on a daily level. If you train your eye to a small part of the chart, you will notice that at the daily level, there is a lot of noise and a lot less correlation than you think.

Furthermore, the long-run correlation is not enough to jump to the conclusion that the new trend will follow the old trend. When you make this conclusion, you are implicitly assuming that the mechanism causing the trend in the 1928-9 period is identical to that causing the current-period trend. This is when you realize that such an assumption is hard to support.

The Atlantic piece debunks this chart by re-expressing the data as indices. This means we switched from absolute changes in the Dow Jones average to relative changes. This has its own problem actually because the general level of the Dow Jones is so different between those two periods. 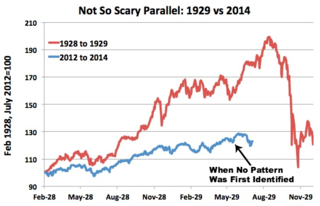 Here are some posts I have written on dual-axis charts. I have been complaining about them since almost the beginning of this blog. Back in 2006, I wrote this piece which takes a different path to debunking a similar chart -- by compressing or expanding one of the axes.

In a more recent post, I showed an example of when it is natural to use two axes on the same chart.

And here I thought the correlation showed that the market grows over time.

Seems like your replot of the data is good, and you could simplify by giving it truly a single y-axis... say proportional change relative to Jan 1 or something like that. It would look identical to yours, but emphasize that the volatility observed in '28 & '29 isn't being seen today.

I get what you're saying about dual axes on the first viral chart. However I think the more dramatic sin is one of extreme cherry-picking. If you're looking for a time-period to compare '28 & '29 to, you could pick any period, say the 2 years after July 2nd 1983. Given enough patience or an algorithm that looked for meaningless correlation, you could probably do even better than this particular comparison.

Hig: The second version is not my work but that of the Atlantic blogger. Just thought I should clarify that.