A deeper look at the Bloomberg report

In the prior post, I linked to Eric P.'s (link) vetting of the Bloomberg chart on the drop in median male income in the U.S. in the last few decades.  Just as a reminder, here is the key chart: 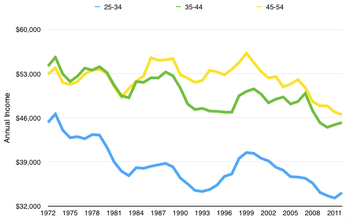 There is a different way to digest the chart above, which is what I want to talk about in this post. Notice that people age over time so if you trace the blue line from left to right, at every point in time we are comparing different people.

Instead, let's trace the same people across time -- this is known as a cohort analysis. I traced a black line through the above chart: 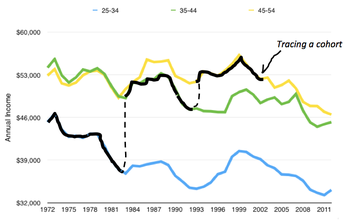 This cohort consists of male workers who were 25 to 34 years old between 1972 and 1982. By 1982, they would have aged to between 35 and 44 years old and so they would belong to the green line. Then they shifted up to the yellow line. So over the lifespan, the median worker increased their income.

You might notice that this analysis is very rough because the data is not granular enough. For example, if you are 34 years old in 1972, by 1973, you already moved from the blue to the green line. With the proper data, this analysis can be made precise. The weird jump (indicated by the dashed lines) is most likely a consequence of the imperfections in the cohorting.

If we have the birth year data, then we can trace people who are born in each year forward, and then stack all these traces on the same chart to figure out true generational changes. Imagine that the chart would have age on the horizontal axis.

One of the key elements of numbersense is realizing that there is no single way to analyze any given dataset. When the data is rich, it holds many different insights.

Hard to describe. Will whip up a chart tomorrow, time permitting.