Where are the millionaires? Where's the news?

The financial media, ranging from Wall Street Journal to Zero Hedge, blogged about the geographical distribution of U.S. millionaires. The stories came with a map, and in the case of the latter, two data tables ranked by ascending and descending prevalence of millionaires. The map looks like this: 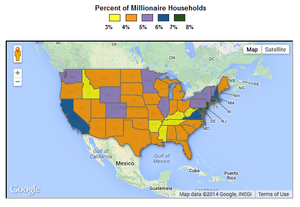 The talking point lifted from the press release of Phoenix Marketing, who is the origin of the data, focuses improbably on North Dakota. For example, the WSJ blog began with:

The state making the fastest climb up the millionaire rankings doesn’t have a single Tiffany or Saks Fifth Avenue store. The closest BMW dealership is a six-hour drive from the capital.

Welcome to North Dakota, which jumped 14 spots in the annual rankings of millionaire households per capita released by Phoenix Marketing International.

The trouble is, you can't pick North Dakota out of the map; it just doesn't stand out. The map uses a different methodology of ordering the states, by groupings of the prevalence of millionaires, that is, the proportion of households in each state who are labeled "millionaires" by Phoenix Marketing.

The text, by contrast, draws attention to the change in the rank of states using the proportion of households who are millionaires as the ranking criterion. This data is two steps removed from the data used for the map (start with the map data, compute the year-to-year change, then convert to ranks).

State-level averages pose a challenge: state population varies a lot, and this leads to variability in the estimates of smaller states. You are likely to find smaller states over-represented in the top and bottom of state ranking charts. I talked about a similar situation relating to interpreting high schools test data (see this post, and Prologue of Numbersense link.)

Instead of using proportion of households who are millionaires, I prefer to use the number of millionaires per 1,000 households. Mathematically, these two are equivalent. If we plot that metric versus the size of states (number of households), we see the familiar pattern: 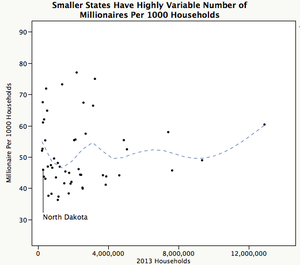 An interpretation of these state average millionaire metrics has to account for state population size. 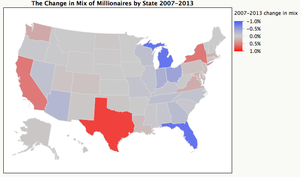 Think of an accounting equation. In this view, the positive changes must balance out the negative changes since I am only converned about any shift in mix. What this map shows is that Texas, California, New York, and Washington have the top net gains in the number of millionaires while Florida, and Michigan have the biggest net losses. North Dakota is again in the middle of the bunch.

This view ignores the total net change in millionaires as it focuses on the mix by state.  You'd need to figure out what is the relevant question before you can come up with a good visualization of this (or any) data.

I have to admit upon looking at your "improved" map version, I immediately thought red (generally negative) would have indicated a decline and blue an increase. What confused me even more was the fact that negative values are going upwards and blue downwards in your legend. Otherwise, thanks for the insight in your article.

My natural assumption on the red vs blue in this case was more related to a heat map - red for more activity(hotter), blue for less(cooler).

Jim and jlbriggs: I went through that exact sequence when I created the map. First I was with Jim as I associate red with negative numbers. Then I realized that red can also mean hot, like jlbriggs said. A different color scheme altogether can remove this confusion.