Long-time reader Daniel L. sends in this chart illustrating a large data set of intra-state migration flows in the U.S. The original chart is at Vizynary by way of Daily Kos. 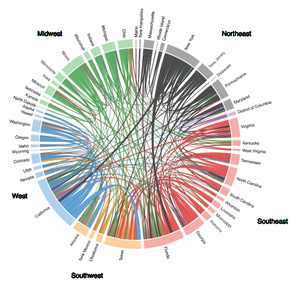 There is no denying that this chart is beautiful to look at. But what is its message? That there are people migrating from and to every state? (assuming all fifty states are present)

Daily Kos describes how one can hover over any state to see its individual patterns. Something like this: 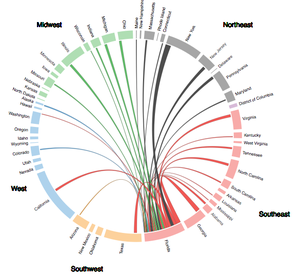 This is a great way, perhaps the only way, to consume the chart. Essentially, the reader is asked to generate a small-multiples panel of charts. The chart does a better job at showing the pairs of states between which people migrate than at showing the relative size of the flows. The size of the flows is coded in the width of the arcs. The widths are too similar to tell apart; and it doesn't help that no legend is provided.

The choice of color is curious. Each region of the country is its own color, in a "nominal" way. It is a design decision to emphasize regions.

Another decision is to hide information on the distances of the migrations. Evidently, the designer sacrificed that information in order to create the neat circular arrangement of states.

A shortcoming of this representation is one missing dimension: the direction of the flow. I'm not sure given any pair of states A and B, whether the net migration is into A or into B.

I propose a solution using the map while preserving the interactive element of the original.

On this map, when you hover over a particular state, it highlights all other states for which there are migrations flows into or out of that state. For color, use a blue-white-red scheme with blue indicating net inflow, red indicating net outflow, and white for near-zero flows. Include a legend.

Another important decision for the designer is absolute versus relative scales. In an absolute scheme, you rank the entire set of flows for all pairs of states; obviously, the resulting colors would be influenced by the state populations. Alternatively, you rank the flow sizes within each state; in this case, the smaller states will feel exaggerated.

The map has the additional advantage of showing the approximate distance (and direction) moved, which, for me, is a useful piece of information.

I think the thickness of the bands are related to total bandwidth (both directions), while the color indicates the origin of the majority of the movers. For example, when hovering over Florida, the band connecting to New York is black, indicating that more people are migrating from New York to Florida than Florida to New York.

But how then David can you tell the direction of the migration flow between Florida and Georgia, where the band is red either way?

I do wonder a bit at the choice of colors, as they're, forgive me, a bit of a red herring.

Look at the thickness of the linking lines at either end. The ends represent "flow" from that location. If the flow is larger at, say, California than Nevada, that means more people are leaving California for Nevada than leaving Nevada for California. If there's any doubt, just mouse over a link in the original article, and it'll give you explicit numbers and direction. In many cases, it's about even, as in between Florida and Georgia.