A Relection on the past year:

Thanks to you for continuing to make this blog a success. Writing it has given me much enjoyment over the years, and I have learned much from your comments as well as from the visualization projects of many colleagues. 2013 also saw the publication of my new book Numbersense: How to Use Big Data to Your Advantage (link). I thank those of you who have purchased the book, and supported my writing. For those who haven't, please check it out. I have also been speaking at various events, mostly about interpreting data analyses published in the mass media, and building effective data analytics teams. In addition, I am heavily involved in the new Certificate in Analytics and Data Visualization at New York University (link). While the frequency of posting has suffered a little due to my other projects, I hope you found the contents as engaging, fun, and constructive as before.

Looking forward to 2014, I have as usual a basket of projects. Besides the two blogs, I will be expanding my teaching at NYU, including a visualization workshop that I'll be writing about here soon; taking on consulting projects; evangelizing better communications of data and analytics; and prospecting several book projects. I continue to spend most of the week at Vimeo, where my team analyzes data.

This will be my last post in 2013. It is an extra-long post to tie you over to the New Year. Happy New Year!

A short while ago, I was in correspondence with Thomas Rhiel who created a lovely map depicting the age of buildings in Brooklyn (link). In this case, it's the data that intrigues my interest. I haven't seen this type of data visualized before. The map type is exquisitely aligned to the data: buildings are geographically located and the age is a third, non-geographical dimension which is encoded in the colors. Red-orange is the most recent while green-blue is the oldest. 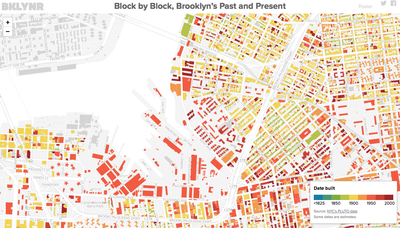 The data is at the level of individual buildings. If you hover over a building, you find the raw data including the address and the year of construction. The details seem to show that even the shape of each building is depicted. This really impressed me since a lot of manual labor must have been applied (according to Rhiel, there is a source for this type of data). Here is the map at its most magnified: 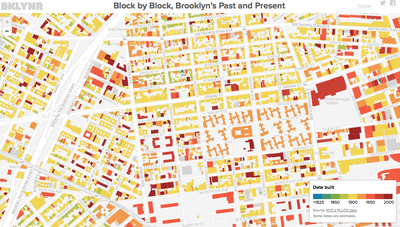 I came across this starry patch near the Manhattan Bridge, in which the buildings show up as red asterisks. (Rhiel said the shape came from the data. I am not sure I believe the data. Anyone lives near Sands Street?) The map is useful if you are interested in questions such as "where are the new developments" (look for the deep red buildings) or "what's the average age of the buildings in a specific block" or "what's the age distribution of the buildings in a set of blocks". At the magnified level shown above, the street names are available to help readers orient themselves. The light gray color keeps the roads and the names safely in the background.

Now, zoomed to the other extreme, we get the image of the whole of Brooklyn: 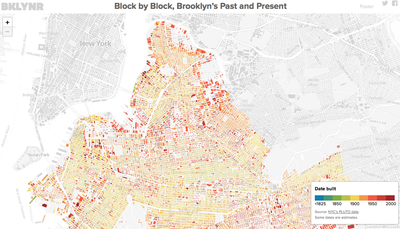 I have a couple of suggestions for Rhiel. As someone who is not familiar with the geography of Brooklyn, this view presumes knowledge that I don't have. Unlike the magnified view, there are no text labels to help us decipher the different sections of Brooklyn. It would be nice if there is a background map to indicate the better-known areas like Williamsburg or Brooklyn Heights or Red Hook, etc.

The other concern is the apparent lack of pattern shown here. At this level, an appropriate question is which sections of Brooklyn are being redeveloped and which sections have older buildings. I see sprinkles of colors everywhere, giving the impression that everything is average. I suggested to Rhiel that aggregating the data would help bring out the pattern.

In data visualization, there is an obsession of plotting the "raw data" at its most granular level. Sometimes, this strategy backfires. It's the classic signal versus noise problem. Aggregation is a noise removal procedure. If for example, Rhiel gives up the data for individual buildings, including those beloved building shapes, and looks at the average age of buildings within each block, or even Census tracts, I suspect that the resulting map would be more informative.

It turns out that the Graphics team at the New York Times just published an interactive map that illustrates exactly what I suggested to Rhiel. Since this post is getting long, please go to the next post to continue reading.

I live thousands of miles from Brooklyn, but I googled, and the asterisks are exactly what they look like. Each arm of the asterisk is a square tower block of about twelve stories.

No need to live near Sands St. Google maps with satellite view will confirm that they are in fact asterisk shaped buildings.

Thank you for the posts through the year. I was involved in a class on statistical consulting last year and feel that I should have made more use of some of your material. It is an excellent exercise to go through the steps of starting with a ridiculous chart and producing something that is useful.

Even in non-satellite view, Google seem to have the same data set that lets them represent the buildings as shapes on their map.

Did you ever see this Dutch map? http://citysdk.waag.org/buildings/

Derek, the local government will have this information, as they are involved in the planning process, and by this stage will have it entered in a Geographical Information System (GIS). They can then either sell or give the information to others to include in their maps. Mapping authorities also have similar information that they have entered from aerial photos.