The need to think about what you're seeing: an incomplete geography lesson

If your chart is titled "The Most Popular TV Show Set in Every State," what would you expect the data to look like?

You'd think the list would be dominated by the hit shows like The Walking Dead and Downton Abbey, and you might guess that there are probably only four or five unique shows on the list.

But then it's easy to miss the word "set" in the title. They are looking for most popular show given that it is set in a particular state. Now this is a completely different question -- and conversely, it guarantees that there will be 50 different shows for the 50 states, assuming that one show can't be set in multiple states. This is also, computationally, a much more complex question. Some locations, like New York, Mass. (Boston), and Illinois (Chicago), are many times more likely to be the settings of TV shows than other states. This means, one might need to go back many years to find the "popular" shows in the less attention-grabbing states.

I used quotations for the word "popular" because if one has to dig deep into history for a specific state, then it is possible that the selected show would not be popular in the aggregate! This is not unlike the issue of whether having your kids pick up a popular sport (like basketball) or instrument (like violin) is better or worse than an unpopular one (like squash or trombone). The latter route is potentially the shorter to stand out but their achievement will be known only to the niche audience.

This brings me to how one should look at a map like this one in Business Insider (link): 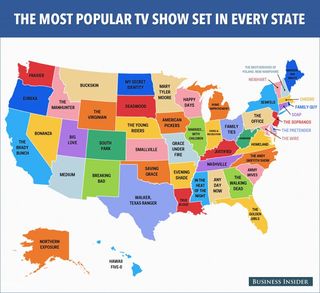 The first thing that strikes you are the colors. The colors that signify nothing. Since each state has its own TV show, by definition each piece of information is unique. As far as I can tell, the choice of which states share the same color is totally up to the designer.

As I have remarked in the past, too often the designer uses the map as a lesson in geography. The only information presented to readers through the map type is where each state in located in the union. Without the state names, even this lesson is incomplete. We learn nothing about the relative popularity of these shows, the longevity, the years in which they went on air, etc.

Geographical data should not automatically be placed on a map.

Is there any "data" in this map? It depends on how you see it. Here's what the author described went into pairing each state with a TV show:

To qualify, we looked at television series as opposed to reality shows.* Selections were based on each show’s longevity, audience and critical acclaim using info from IMDB/Metacritic, awards, and lasting impact on American culture and television... *When there wasn't a famous enough series to choose from, we selected a more popular reality show. That happens once on this list (IA).