The exception to the rule against dual axes

Dual axes are almost always a bad idea. But there is one situation under which I'd use it.

Last week, Alberto Cairo (link) engaged in a Twitter/blogging debate about a chart that first appeared in Reuters concerning the state of the woman CEO in the Fortune 500 companies. Here is the chart under discussion: 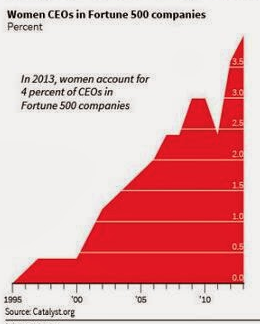 This chart already is cleaner and more useful than the original original, which came from a research report from Catalyst (link): 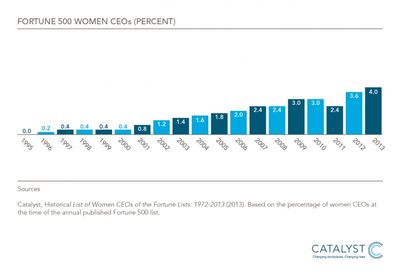 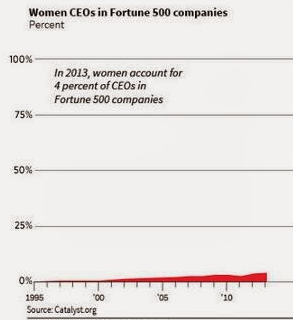 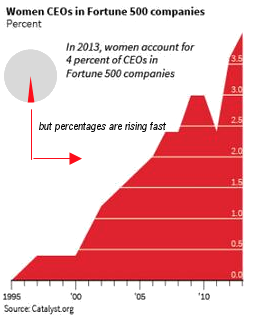 The Voila blog (link) has yet another take: 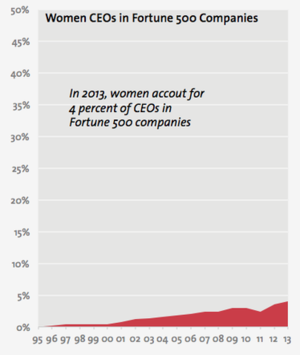 Then Chris Moore, responding to Cairo, created this view and also left some insightful comments: 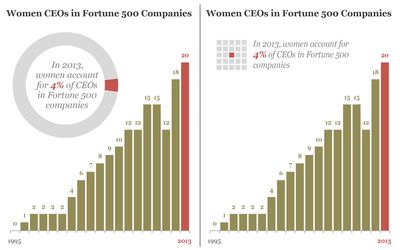 What's at stake here? There are really three related topics of discussion.

First, there is the matter of the upper limit of the vertical axis. Three solutions were suggested: 100 percent, 50 percent, and 4 percent. (Cairo at one point suggested 25 percent, which can be wrapped into the 50 percent bucket.) In reality, this is an argument over which of two key messages should be emphasized. The first message is that women still comprises a pathetically small proportion of Fortune 500 CEOs. The second message is more hopeful, that the growth in this proportion has been quite rapid since 1995.

All versions of the chart actually display both messages. In the Reuters chart (as well as Moore and Cairo), the message about the absolute proportion of women is given as an annotation while the Keller and Voila versions extend the vertical axis, thus encoding this message directly to the chart. Conversely, the Keller and Voila versions deemphasize the growth in proportions, and so I'd have preferred to see a note about that growth when using their versions.

Voila selectes a 50% upper limit because the 50/50 split has an intuitive meaning in the context of gender balance. Because the resulting chart is so visually arresting, and so biased to one of the two key messages, I'd only consider it if the point of the display is to draw attention to the female deficit.

The second disagreement is in using absolute counts versus relative proportions. Moore chose absolute counts. I am in this camp as well. This is primarily because we are talking about Fortune 500 and the 500 number is an idee fixe. In Moore's version, I find the data labels distracting since all the numbers are small and insignificant.

Finally, the linkage between the absolute and the relative numbers also produces multiple solutions. Cairo's post pinpoints this issue. His solution is to include an inset pie chart with an arrow to explicitly link the two views. Moore likes the inset idea, but experimented with a donut chart or a partition in place of the pie chart. He also removes the explicit guiding arrow.

It turns out this dataset is perfectly made for the dual axes. The absolute counts and relative proportions are in one to one correspondence because it's really only one data series expressed twice. This happy situation leads to one line that can be cross-referenced on two axes, one side showing counts and the other side showing proportions. This is shown in my version below (the orange line). 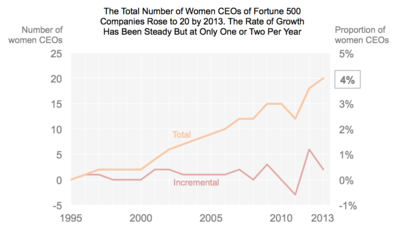 In addition to having two axes, I have plotted two related data series. The second series (in red) shows the incremental change in the number of women CEOs from the previous year (also shown in both counts and proportions).

The first series (the same one everyone plotted) draws attention to the first message, that the growth rate of women CEOs is quite strong since 1995. The second series is a bit of a downer on that message, suggesting that from the absolute count perspective, the progress (only one or two additions per year) has been painfully slow, and not that impressive.

Thanks again to Alberto for making me aware of this discussion. This has been fun!

PS. I have left out the other chart and may return to it in a future post.

Thanks for including my redesign in your analysis. It's interesting to have your opinion on this chart and on scaling in general. I agree that it's a good opportunity to use a double-axis and I look forward to reading what you have to say about the second chart. I'm surprised so few people picked up on it.

Years of double-axis charts have trained me always to assume that when there's two lines on the chart, each one refers to a different axis. The Junkcharts version is really clever, but since both of the series and axes refer to the same underlying scale, it took me a second to figure out how to read it. Maybe it would help to place both the absolute-count and relative-proportion scales side by side on the right of the chart? Making the zero line stand out would have helped me orient myself too. As always, really love the blog!

Similarly, it's totally okay to have a Centigrade and a Fahrenheit scale. As Kaiser says, they scarcely count as "dual axis" at all.

I love the elegant simplicity of this; the graph's great, and a descriptive title means that the visualisation can be kept really clean. I do agree with spindoctors' comment; two axes implies two scales, so it would help to make it clearer one way or another that the numbers are different representations of the same scale.

I would also be inclined to visually differentiate the rate of change line and the magnitude line more than just having them as different colours.

Thanks very much for the insightful roundup.

Coming into this discussion a bit late .....

Visually, the charts by Keller and Voila, give a "truer" view. They visually emphasize that women'd CEO number only 4 % of the total. The charts also show that the proportion has remained disproportionately low through the period depicted.

While your chart is ingenious, it emphasizes the growth. It does not visually communicate that these CEOs form only 4%.

I had recently grappled with a similar issue in my last blog post - http://www.visualquest.in/2014/01/uniform-scale.html
Here we are plotting sales and profit numbers. Profit number will invariably be a smaller number. When the two are plotted side by side, we can only achieve one objective - give a sense of the right proportion [ but the slope indicating growth in the variable will be incorrect] or give a correct sense of growth [ where the proportion will be incorrect. ]

In the context of the financial report, the actual value and the proportion are paramount. However since profit is a lower number the growth rate [even if it is the same rate] will invariably appear lower. But presenting the actual values gives a "truer" value.

Just wanted to add that I wouldn't call this example an exception to the rule.

The rule really applies to plotting multiple series, with different measures, using different y axes to reflect those measures, on the same plot.

Here you're plotting one line, one measure, with two axes labeled in different manners to express the same information differently.

It may be obvious or understood, but I think it's an important distinction. It's an exception to the rule because it deals with circumstances that the "rule" doesn't address.