Joran E. sends us to the following chart via Twitter. 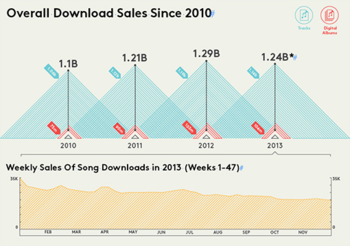 The top chart fails our self-sufficiency test. There are only eight numbers in the data. All eight numbers are printed onto the chart. If they were removed, the chart is neutered.

The triangle elements are distracting and pointless. The data is encoded in the two ends of those black lines. The two data series have very different scales so that when plotted on the same canvas, the information on digital albums (in red) becomes almost imperceptible.

But the bigger problem with the chart is the absence of numbersense.

Start with summing the number of digital albums and the number of tracks. While both units are literally units, they are different units.

A host of statistical adjustments is called for. Revenues would be more telling than unit sales since the average price paid is probably not constant across time. Price is typically inverse to quantity. Singles are cheaper than albums so comparing the units of tracks and the units of albums makes little sense.

The chart on the bottom is a nice idea but again can use some adjusting. As far as we know, the 47 weeks of sales data have not been seasonally adjusted. While the second half of 2013 looked worse than the first half, this insight is remarkable only if this pattern was not likely based on history. Adding lines from previous years would help put things into perspective.

Besides, if sales of other consumption goods fell by 20 percent while sales of digital music dropped by 10%, then by comparison, the digital music industry has fared well. In order to understand the song download data series, we also need to consult the trend for other related goods.

Lastly, by using an area chart, the designer is cornered into starting the vertical axis at zero. If a line chart was used instead, there would be no need to start the axis at zero, and consequently, the drop in weekly sales would appear more pronounced.