When I wrote about the graphic showing the vote distribution around Syria in the Congress a few posts ago (link), readers offered opinions about what's a better graphic might look like. Having considered these submissions, I came up with a new visualization. 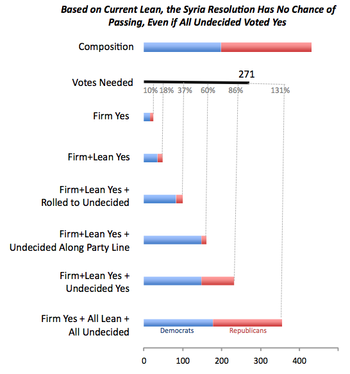 This graphic is one that facilitates an assessment of the prospect of the Syria resolution passing, given the known and leaning votes. It addresses various scenarios of how the undecided votes would break out. It also considers the extreme -- and unlikely -- case in which all leaning yes votes are sustained, all leaning no votes reverse, and all undecided vote yes. In that scenario, the President would have 131% of the votes needed for passing the resolution.

In this graphic, the real story of the data is revealed: based on the then known and leaning votes, the President would face certain defeat. Even if all the undecided broke in his favor, he would still only get to 86% of the votes needed to pass.

The top bar, showing composition, is a concession to those who wanted to understand how each party is voting under each scenario. It's a minor concern here.

Comparison to the original chart, reproduced below, is almost unfair. What is the prospect of the resolution passing? It's impossible to tell. 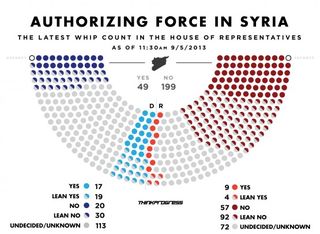 My graphic exposes less data, hides all No and Leaning No votes, displays no vote totals, and focuses on a computed metric, the proportional progress towards the 271 vote goal.