Rick (via Twitter) tells me he is baffled by this chart that showed up in Financial Review: 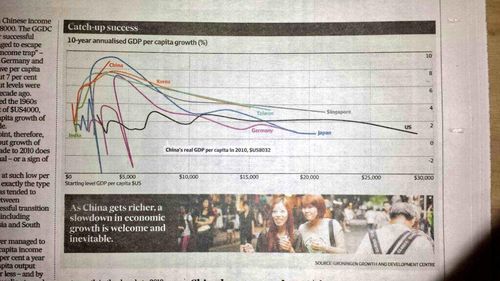 I'm baffled as well. What might the designer have in mind?

Based on the cues such as length of the curves, one would expect the US, Singapore, Japan, etc. to be leaders and India and China to be laggards. But what is being plotted on the vertical axis? It's not explained.

The title of the chart seems to indicate there is a time dimension but it's not on the horizontal axis where you'd expect it. The vertical axis does not appear to be time either, as it runs negative. The length of the lines could encode time but it is counterintuitive since China's line should then be much longer than that of the U.S., given its history.

Finally, how does one explain the placement of the callout box, noting China's GDP per capita. It literally points to nowhere.

It would seem to link current GDP per capita to GDP growth with points connected by time, and some kind of smoothing to iron out most recessions and so forth. Presumably the data for China's ancient pass has simply been omitted if it is known at all. I don't understand the call-out box though, all I can think is that 10-year annualised growth rates are calculated compared to GDP at the starting year so the end of the Chinese line corresponds to its GDP per capita in 2000.

Here's my guess: It should have been a scatter plot and the lines are some sort of weird smoother. The x-axis is the per capita GDP in a given year (i) and the y-axis is the percentage growth rate corresponding with that year (i:i+1). So maybe the message that is trying to be communicated is that as economies grow, the percent growth rate decreases? I haven't looked up any numbers at all to see if the line ends correspond with that country's maximum per capita GDP...

Also, Germany and Japan are the only countries with negative growth - perhaps reflecting World Wars? After the negative growth rate, the next year is to the left on the x-axis so I'm guessing that the lines are connecting the points in order.

I think it is pretty cool. It shows 10 years of data points connected sequentially. X axes is the per-capita gdp and y axes is growth.

I like the feeling of countries trying to catch up the US but still falling behind. Also, you see that high growth only comes with low gdp-per capita.

This is a good idea, plotting in a phase space. Only since GDP growth is the logarithmic derivative of GDP, this cries for a log plot on the x axis. Obviously, this would also help de-confuse the squiggles on the left side.

Makes sense to me %Growth vs Per Capita GDP. Time is Static.

The lesson here is don't fall off the float while you're decorating it.