One piece of  advice I give for those wanting to get into data visualization is to trash the defaults (see the last part of this interview with me). Jon Schwabish, an economist with the government, gives a detailed example of how this is done in a guest blog on the Why Axis.

Here are the highlights of his piece.

He starts with a basic chart, published by the Bureau of Labor Statistics. You can see the hallmarks of the Excel chart using the Excel defaults. The blue, red, green color scheme is most telling. 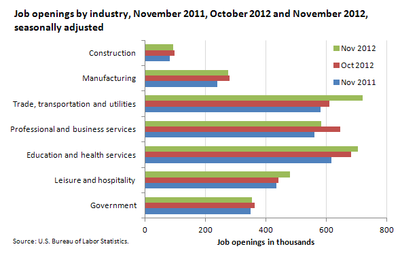 Just by making small changes, like using tints as opposed to different colors, using columns instead of bars, reordering the industry categories, and placing the legend text next to the columns, Schwabish made the chart more visually appealing and more effective.

The final version uses lines instead of columns, which will outrage some readers. It is usually true that a grouped bar chart should be replaced by overlaid line charts, and this should not be limited to so-called discrete data.

Schwabish included several bells and whistles. The three data points are not evenly spaced in time. The year-on-year difference is separately plotted as a bar chart on the same canvass. I'd consider using a line chart here as well... and lose the vertical axis since all the data are printed on the chart (or else, lose the data labels).

This version is considerably cleaner than the original.

I noticed that the first person to comment on the Why Axis post said that internal BLS readers resist more innovative charts, claiming "they don't understand it". This is always a consideration when departing from standard chart types.

Another reader likes the "alphabetical order" (so to speak) of the industries. He raises another key consideration: who is your audience? If the chart is only intended for specialist readers who expect to find certain things in certain places, then the designer's freedom is curtailed. If the chart is used as a data store, then the designer might as well recuse him/herself.

Why are tints preferred over different colors?

I'm not arguing: I don't even disagree that it works better. I just don't understand it.

If you add a small column chart below the bottom one, the relative year-on-year difference could be shown as well. That would render changes in the industries with smaller values more clearly.