Reader Steph G. didn't like the effort by WRAL (North Carolina) to visualize the demographics of protestors in Raleigh. It sounds like the citizens of NC are making their voices heard. Maybe my friends in Raleigh can give us some background.

There are definitely problems with the choice of charts. But I rate this effort a solid B. In the Trifecta Checkup, they did a good job describing the central question, as well as compiled an appropriate dataset. I love it when people go out to collect the right data rather than use whatever they could grab. The issue was the execution of the charts.

The first was a map showing where the arrested protestors came from.

Maps are typically used to show geographical distribution. The chosen color scheme (two levels of green and gray) compresses the data so much that we learn almost nothing about distribution. I clicked on Wake County to learn that there were 178 arrests there. The neighboring Randolph County had only 1 arrest but you can't tell from the colors.

The next chart shows the trend of arrests over time. I like the general appearance (except for the shadows). The problem is the even spacing of the columns when the gaps between the arrests are uneven.

The final set of charts is inspired. They compare the demographics of those arrested protestors against the average North Carolina resident. For example:

For categories like Age with quite a few levels, the pie chart isn't a good choice. It's also  hard to compare across pie charts. A column or dot chart works better. 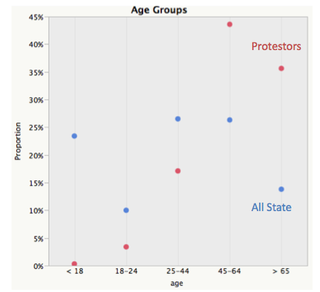 The first map reminds me of the xkcd comic about heatmaps that are really just population maps.

Whenever I see a data set with three dimensions, I look to see if one is a quantity, and another has exactly two categories. If so, voila, scatter chart.

I would have given up some of the demographic data, like the age distribution, to see some information about what the Assembly was doing on various weeks. For instance, were there different issues up for vote that might have accounted for higher turnouts?

Also, since the proportion of outsiders has been introduced into the debate, it would have been nice to see this broken out in the bar chart. Quick mental arithmetic tells me that the percentage of out-of-state residents arrested is pretty low, but seeing it depicted would make it easier. The states of residence of this group is less interesting than how many of them there are.

And, to Mildred's point, plotting some major cities (especially Raleigh) on the map would put the county data in some context.