Luck is not easy to nail down in a number. For the fantasy football league, I have a way of looking at luck. One aspect of luck is which team you are matched up with in any given week. There is a matter of facing a stronger or a weaker opponent. There is a different matter of whether you face a given opponent on his/her hot or cold day. Sort of like whether a hitter faces a pitcher on his good or bad day.

As noted before, each FFL player picks nine players out of 14 every week, and those nine earn points. There are typically 200-300 possible choices of nine players. So we can measure how well any FFL owner performs by looking at the points total of the activated squad against the whole distribution of 200-300 options. This was the topic of my earlier post.

Now, if I am lucky, then I tend to face opponents in the weeks in which they perform poorly. And the following chart shows this measure from week to week: 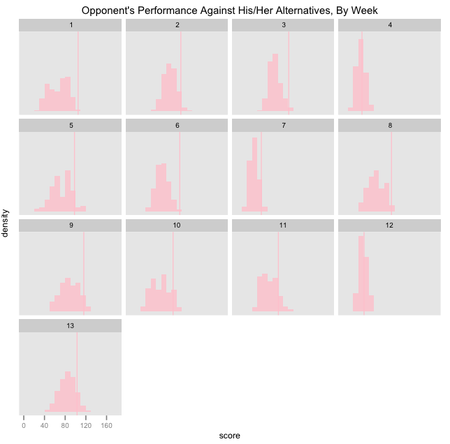 In Week 1, this owner was rather unlucky, in the sense that his opponent pretty much used his best possible squad. On the other hand, in Week 4, his opponent (a different team) played a weak hand, something close to the median squad (in addition, the entire histogram sits on the left side of the chart, meaning that even his opponent's best possible squad this week would have been easy to beat.)

In Chapter 8 of Numbersense, I use such an analysis to figure out the role of luck. This luck factor turned out to be even more important than the owner's own skills!

Special for Junk Charts readers: here is an excerpt from Chapter 8 (link).

The second book giveaway contest is under way on the sister blog. Enter the contest here.