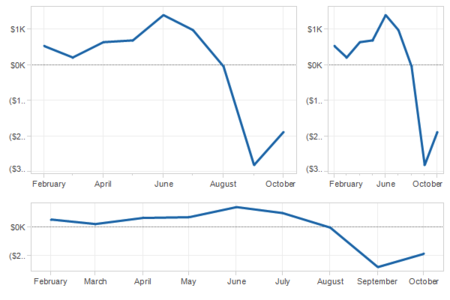 Can you truly look at this graph in isolation and state that the Y axis is inappropriate? Without context, a 50% rise in a value sounds like an earth-shattering change, but do we know that it's not normal variation for whatever value we're tracking? There are other changes of roughly the same magnitude in the same two-month period, including a steeper one that starts on 6/19.

The "bank to 45 degrees" recommendation always strikes me as a good starting point for analyzing unfamiliar data but a little tone-deaf for charts that will be updated and consulted frequently (such as a web traffic analytics dashboard). For familiar data sets, where you're aware of the typical magnitude and variation in the data and just want the current state at a glance, there would seem to be an argument for incorporating these norms into the design (for instance, by using a Y axis scale that includes more values than needed for the current view) in a way that depicts variation with the right level of drama.

Jeff: I agree with your general point that the scale should be set with some knowledge of the normal variability. However, that is not how Google or any of these online graphing tools do. I use Google Analytics every day so I can tell you most of their charts look like flat lines, and if I rely on those, I'll miss most of the signal.