Lose the base, connect the dot, and confuse the message 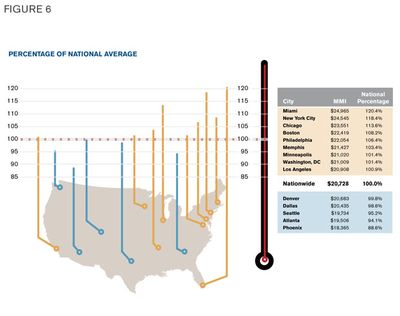 The first problem readers encounter with this image is "What is MMI?"  I like to think of any presentation as a set of tearout pages. Even if the image is part of a book, or part of a deck of slides, once it is published, the writer should expect readers from tearing a sheet out and passing it along. In fact, you'd love to have people pass along your work. This means that when creating a plot such as this, the designer must explain what MMI is in the footnote. Yes, on every chart even if every chart in the report deals with MMI.

MMI, I'm told, is some kind of metric of health care cost.

What a mess. They are trying to use the metaphor of "measuring one's temperature", which I suppose is cute because MMI measures health care costs.

Next, the designer chose to plot the index against the national average as opposed to the dollar amount of MMI. This presents a challenge since the thermometer does not have a natural baseline number. This is especially true on the Fahrenheit scale used in the U.S.

Then, a map is introduced to place the major cities. The bulb of each thermometer now doubles as a dot on the map. This step is mind-boggling because the city labels aren't even on the map. So if you know where these cities are, you don't need the map for guidance but if you don't know the locations, you're as hopeless as before.

How the data now gets onto the complex picture requires some deconstruction.

First, start with a bar chart of the relative index (the third column of the table shown above).

Then, chop off the parts below 85 (colored gray). 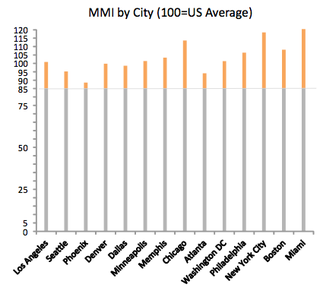 Next, identify the cities that are below the national average (i.e. index < 100) and color them blue. 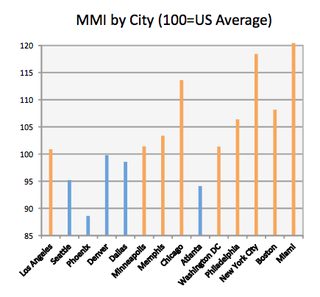 You can see this by focusing only on the chart above the map. In other words, this part:

To get from here to the version published, add a guiding line from each bar to the dot on the map for the corresponding city. Notice that a constant-length portion of each bar has been chopped off, and now each bar is augmented by some additional length that varies with the distance of the bar chart from the geographical location of the city as shown on the map below. For instance, Miami, which is furthest south, has the biggest distortion.

The choice of 85 as a cutoff is arbitrary and inexplicable. If we really want to create a "cutoff" of sorts, we can use 100, which represents the national average. By plotting the gap between the city index and the national index, effectively, the percent difference, we also can use the sign of the difference to indicate above/below the national average, thus saving a color. 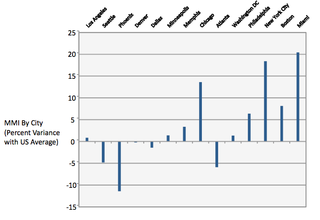 One of the most telling signs of a failed chart is the appearance of the entire data set next to the chart. That's the essence of the self-sufficiency test.

Not sure that I agree with this blanket statement...

"This means that when creating a plot such as this, the designer must explain what MMI is in the footnote. Yes, on every chart even if every chart in the report deals with MMI."

Surely this would be unnecessary if every chart in the report deals with MMI. In fact, is this not adding additional junk to the page?

The final chart is OK but I think column charts need to include the origin to be able to see the relative differences. In order to convince people of the importance of the origin I like to show people two charts (admittedly dual axis charts) that include the exact same data that appear to say completely different things simply because the scales have changed.

Your final chart works because the scale is already normalized but "chopping off" charts is exactly the kind of thing I would avoid in most situations (nearly all the charts I create are focused on relative comparison so the origin is important).

FMS: Thanks for the note, which tells me some readers may get confused by my presentation. I was walking through the steps that got the designer into this mess; I am definitely not advocating "chopping off" the base of bar charts. There are some old posts here in which I explicitly warn against such a practice.
Also, I want to draw attention to the difference between using 85 versus using 100 as the dividing line here, the benefit of which you nicely summarized.

Bob: I'm a stickler about such things. People who work for me can attest to that :) Ninety-percent of the time, we can get away with not explaining what is on the chart but the 10% of the time invariably will involve someone tearing out the one page and sending it to an important person. Within two seconds, said person will decide whether to move on, and we won't be around to explain what's on the chart. So yes, you should put the explanation on every page, even if it feels silly.

I did not read carefully. My apologies.

I clicked on the first thumbnail to enlarge the image of the graph before I read your text. It took me at least 15 seconds to figure out the chart has nothing at all to do with temperature. (Disclaimer: People tell me I'm literal-minded.)