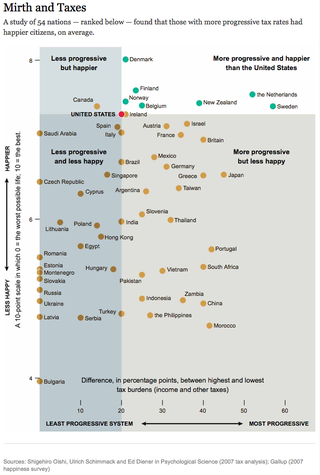 There actually is a slight trend between the two variables, but the background quadrants disguise it! See some of the discussion and comments on Albert Cairo's blog, http://www.thefunctionalart.com/2013/04/trend-lines-in-scatter-plots.html

Of course that doesn't mitigate any concerns of data quality. Cross-national comparisons in the social-sciences(regardless of topic) almost always have some of these problems (non-random selection of nations, incomparable stats. between nations, etc.)

Also not clear to me why delta(highest, lowest) burdens is the right measure. I have seen "fraction of all tax revenue earned by top X%" used before, and under some of those definitions there aren't many more progressively taxed countries (http://taxfoundation.org/blog/no-country-leans-upper-income-households-much-us)

Or perhaps the skewness associated with the distribution ...

I wouldn't have any idea what number would be the right one to use to determine how progressive a nation's tax strategy is.

But regardless what number you choose...you should make sure that it supports your headline (or, well, vice-versa) ;)

I'm sure you can find a way to draw a trend line through that plot that makes it look like it supports the conclusion, but a muddled square block of data points is hardly a correlation.

The place where this fails from a graphical perspective is in the treatment of the quadrants. I also started to compare the number of points in each, but this doesn't have much to do with whether the two factors are correlated.

Perhaps because the claimed correlation is not strong enough to hit you over the head, the division of the space into four areas actually works against the perception of the trend. The point of doing this was presumably to facilitate comparisons in both dimensions with the U.S. However (and I acknowledge that this is subjective) the different shading suggests to me that the areas themselves are significant--that the divisions are somehow a property of the data set as opposed to a way to call out one point.

I wonder whether a plain white background with a pair of subtle dashed reference lines (or no reference lines at all) wouldn't have better served the point the author was trying to make.