Junk Charts
Welcome Twitter About Book Blog RSS
Breaking every limb is very painful
Which software is responsible for this?

Reader (and author) Bernard L. sends us to the Economist (link), where they walked through a few charts they sketched to show data relating to the types of projects that get funded on Kickstarter. The three metrics collected were total dollars raised, average dollars per project, and the success rate of different categories of projects.

Here's the published version, which is a set of bar charts, ranked by individual metrics, and linked by colors. 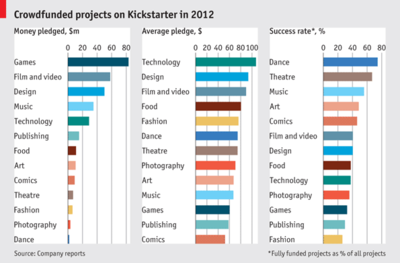 This bar chart does the job. The only challenge is the large number of colors. But otherwise, it's not hard to see that fashion projects have the worst success rate and raised relatively little money overall although the average pledge amount tended to be higher than average.

The following chart used more of a Bumps chart aesthetic. It dropped the average pledge per project metric, which I think is a reasonable design choice. The variance in pledge amount is probably pretty high and thus the average may not be a good metric anyway. The Bumps format though suffers because there are too many categories and the two metrics are rather uncorrelated, resulting in a spider web. Instead of using colors as a link, this format uses explicit lines as links between the metrics. 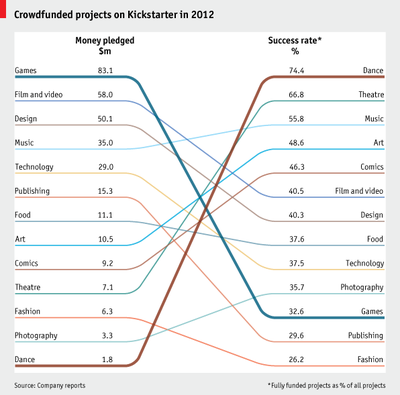 The following version combines features from both. It requires no colors. It drops the third metric, while adopting the bar chart format. The two charts retain the same order of categories so that one can read across to learn about both metrics.

The overall pattern is clearer on a scatter plot. When there are so many categories, it's a pain to put the data labels on the chart. It's odd that the amount pledged for games is the highest of the categories and yet it has among the lowest rate of being fully funded. Is this a sign of inefficiency?

If you're down to two dimensions, how about a scatter chart?

What Derek and Jon said.

It's odd that the amount pledged for games is the highest of the categories and yet it has among the lowest rate of being fully funded. Is this a sign of inefficiency?

Well, on Kickstarter, the Games category is divided into two subcategories - Video Games and Tabletop Games.

Why so many shoddy-looking RPG and board game projects on Kickstarter? I think that people feel they can get by with a certain lack of polish when they are asking for $1000 to print their RPG rulebook pet project, but instinctively know they couldn't do that when asking for $1,000,000 to write their own video game.

For the scatter chart, you could play with swapping the axes. Now the Dance would become the top most and music has the middle ground on both cases.