Some examples of good visualizations of time-series information without moving parts include the "horse-race" charts on the Presidential election (link), and the NY Times plot of Olympic race times (link).

Reader Jeff Cole did some nice Web charts (link) that show NFL matches as horse races. The look of these charts is exceptionally clean and easy to understand. They tell us which matches were blow-outs, and which ones were close, and which ones were tales of two halves. 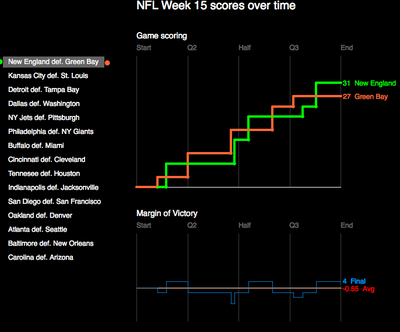 This Green Bay-New England match looked like a thriller, with five lead changes, and a final score gap of only 4 points. Green Bay scored pretty much regularly through the four periods while New England had two relatively long droughts in scoring.

I'm not sure if the Margin of Victory section is worthwhile. It seems redundant to me. The labeling can be better, showing that New England leads are above the zero reference line while Green Bay leads are below the line. I'd consider making this a cumulative amount of time in the lead up to a specific point of the match. That would give an extra piece of information that is difficult to grasp from the Game Scoring chart. 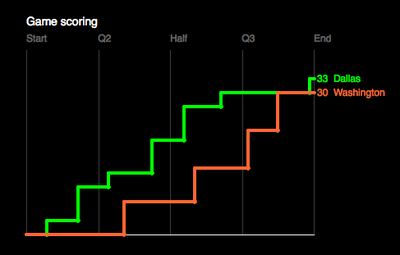 This was an exciting match for a different reason. Dallas was always ahead and eventually won by three points. But it was a shootout in which each team scored regularly. Dallas had a scoring drought for most of the seond half which allowed Washington to get even but then scored a field goal before the final whistle to come out on top. I didn't watch the game but this chart tells me all of that.

On the Game Scoring chart, I'd add vertical tickmarks to help read the intermediate scores. Also maybe put dots to highlight the crossover points, which are where lead changes occur.

NFL is a complex game that is difficult to fully capture in a simple chart like this. It would be nice to add some extra event indicators, such as interceptions, fumbles, and other turning points. That's easier said than done, especially when trying to automate the graph production.

I actually set up a twitter account earlier this year that posts something similar to the "margin of victory" plot automatically: http://twitter.com/pst_sports I had no idea anyone was doing something similar. Interceptions and fumbles are kind of a pain to get out of the available data.