The electoral map sans the map

The key learning is something I often point out on this blog: geographical data can have a greater impact when it is unshackled from the map.

Xan pointed to a series of ideas that are improvements upon the map.

Here's an attempt to portray the election night as a horse race. This borrows an idea from the sports world where a baseball game can be portrayed with such a chart. 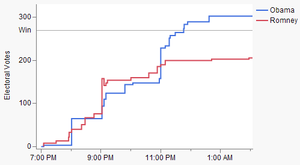 I love this sort of presentation. Similar to a baseball game, someone can look at this chart after the fact and experience the ups and downs of an Obama/Romney supporter without actually being there.

Then Xan spoils some of the fun by transforming the above into the following chart, which portrays Obama's win as a rout. All the suspense is gone! 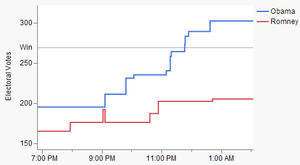 As Xan explains it, he took Nathan Silver's predictions of "sure wins" and plotted those first. Thus, Obama started the night at almost 200 while Romney started with about 170.

While indeed the fun is gone, this is a more accurate view of this just-concluded election. I was a spoilt sport myself that night as I kept telling my friends that the only reason why Romney seemed close at the start was that the Red States generally have smaller populations, and thus took less time to count their votes. In addition, the Red States also tend to favor Republican candidates by very large margins so that the winner could be called early without counting most of the votes.

I have other thoughts on the state of reporting on polls, which I'll cover in a later post.

Also, lots of blue states in the west, which were counted last.

I love these methods of showing the progression.

If the slew of pundits who ended up being so shocked by the outcome of the election had had these two charts to view in real time...perhaps they would not have been so caught off guard.

I'm not sure that anybody was caught off guard. Nate Silver (who's blog has some pretty nice charts, coincidentally) had called it like the night before.