Purists stay clear; many rules to be broken

This chart, from Internet Retailer (March 2012, p. 26), is okay, at least they didn't use pie charts. But it could have been much more effective.

To make it better, we have to break all the rules: 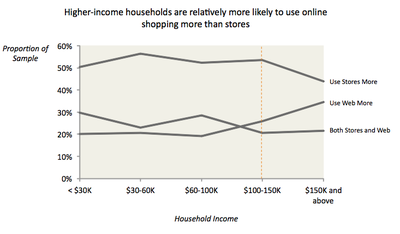 I have collapsed the five income groups into two. That's because the bottom three income groups are more or less the same in terms of online/offline shopping behavior, and the top two groups are more or less the same. Bear in mind that any analysis of this type has a margin of error so differences of a few percentage points are not worth representing. It is possible that even the 10 percent or so differences between the two remaining income groups are not meaningful--we won't know unless we know the margin of error of their methodology.

(Note that you have to consult the Census to get the relative proportions of each income group in order to average the data shown in the original chart.)

In any case, the key message of the article becomes a lot clearer than in the original chart.

Great makeover! Sometimes you have to break some rules. :-)

I like the redesign, but unless I have a strange kind of colorblindness it looks like you mixed up the categories. (For example, according to the original graphic, "Use stores more" should be the largest category.)

Kevin: yes I did mix up the labels. They're now fixed. Thanks for the note.

I don't think I've ever seen a grouped-column chart that wasn't arse-awful, and couldn't be improved by just becoming a stacked-bar chart, which is trivially easy. I wonder if it's a hangover from when colour print was something for special occasions, as it's a lot easier to do stacked-bar charts in colour?