Junk Charts
Welcome Twitter About Book Blog RSS
Purists stay clear; many rules to be broken
How to fail three tests in one chart

Note: This post is by Aleksey Nozdryn-Plotnicki, who blogs at ThinkDataVis.

On my way to Crete recently, I was flipping through the in-flight magazine when I stumbled upon this treat. This full-page piece was about Claire Cock-Starkey’s upcoming (at the time) book, Seeing the Bigger Picture. 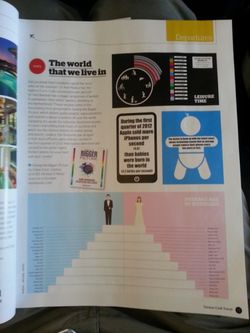 The book sells itself as “Global Infographics” and the article says it is “swapping dry words for colourful illustrated visuals”. The baby and the iPhone are pure decoration, but there are also some information graphics here at the top and the bottom which bear a closer look. 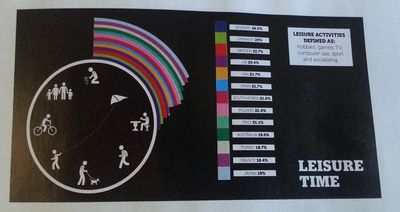 Above we have what at first looks innovative, but is actually a disguised bar chart. That’s fine, but: 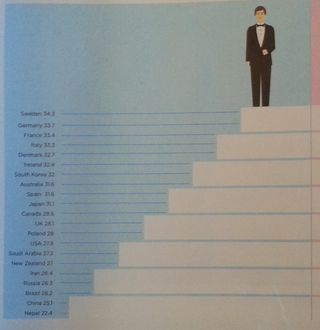 At first this looks more like a traditional bar chart, until you realise that:

Ultimately, what I think we have here belongs in a genre of its own, perhaps “popcorn infographics”.  At the time of writing the one review on amazon.co.uk reads “Bought this for my 14 yr old - absolutely loves it and showed friends who were also suitably impressed. Thank you” which says a lot,  and not all negative. Perhaps there is room for popcorn infographics in this world or perhaps it’s just junk.

Norway goes only 90 degrees around because it is 26,5%, or close to a quarter of the full circle.

This is te only thing I could understand about the chart--if the total (=100%) time (whatever that is) were 12 hours.

I laughed so hard at "even the most leisurely Norwegians only have time for gardening, BEING a kite, and drinking at a table."

Thanks, you made my day ;o)