Bloomberg Markets (November) has this chart showing national debt as a percentage of GDP for selected countries. 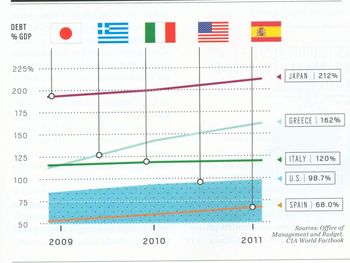 If you count the points, there are only 15 on the chart, three annual numbers for each of five countries.

The theme appears to be redundancy. Countries are identified by both their names and their flags, one placed vertically and one placed horizontally. The 2011 debt-to-GDP ratios are displayed twice, once as the rightmost points on those lines, and once as data labels on the far right. The vertical axis plus gridlines too provide information that is quite unnecessary when there are labels on the right.

The five dots soak up much of our attention but there is no data in them. In particular, the Greek and U.S. dots fall in between two years where the straight lines are just convenience.

If all the lines were given the same color, then it would be straightforward to highlight the U.S. data by giving it a different color. The switch to an area chart for U.S. data is both ugly and distorting. The distortion is due to the vertical axis not starting at zero -- this is acceptable for line charts but certainly not for area charts.

I find that the data themselves present a challenge for interpretation. Based on my reading of economic news, Greece, Spain and Italy are current poster children for countries with debt problems while Japan has had a debt problem but is more associated with a stagnation problem more recently.

The issue is the comparison of each of these countries to the U.S. brings almost zero insight. Italy, for example, probably has some kind of legislative control that puts a lid on debt at 120 percent of GDP. Japan, while not currently in the conversation about countries in danger of default, has much worse debt-to-GDP ratio than Greece, which is in serious trouble. By this measure, Spain is nowhere near as indebted as the U.S. and yet it is in much trouble.

In the following version, I plotted the relative change in the metric with 2009 set to 100. 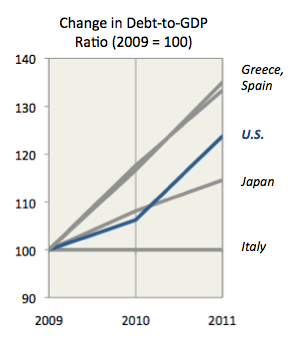 You plotted the debt-GDP ratio; not its change.

emre: I didn't use precise language but I plotted the change. I indiced the ratio to 100 for 2009 so when Greece/Spain got to 135 in 2011, it represents an increase of 35% in 2 years of the debt-to-GDP ratio. Hope this clarifies what I did there.

I think the relevant issue here is that US gets special treatment as a reserve currency so shows how much or how little any of these numbers matter. It's all about the perception of the country's ability and willingness to pay it back (of which Greece has little of either).

The flags, and the lines and dots dropping form them, are very distracting. If flags are desired they should be over on the right beside the country names and %s.