Junk Charts
Welcome Twitter About Book Blog RSS
Light entertainment: impossible is nothing!
When simple is too simple 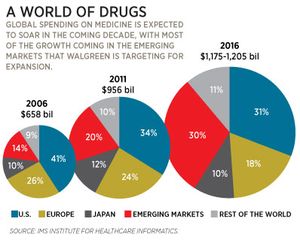 This chart tells us that emerging markets will be responsible for the greatest growth in medical spending up to 2016.

It is hard to find this message in the chart. The gray sector for Japan in 2006 reads 10%, the exact same number as the gray sector in 2016, which appears several times as large. In a pie chart, it is hard enough to compare the sectoral areas within a pie, let alone sectors of different-sized pies.

As usual, a line chart brings out the trend more clearly: 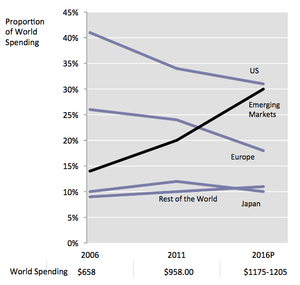 The projected numbers should be clearly labelled as such. "2016" should read "2016P". I'm not sure if the 2011 number was projected also - depends on when the data source was published.

The worst thing about this chart is it's completely misleading. It fails to recognize that there are many billions of people in emerging markets and "rest of the world" while U.S, Europe and Japan combined have just over one billion people. Thus, all this chart is really saying is that population growth in the next several years will mostly occur in emerging markets. One can substitute medical spending with any kind of mass market spending and have essentially the same picture.

Below are a rough estimate of the per-capita medical spending by region using population sizes in 2011. For emerging markets, I have substitued BRIC i.e. Brazil, Russia, India and China, which underestimates the population and thus overestimates the per-capita spend. These parts of the world spend a fraction of what industrialized countries are spending. So what's the story? 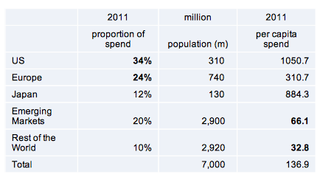 Even given that the sizing of the 2016 pie isn't proportionate, how could it be when the total amount is given as a range? That should make it impossible to show the proportion right, regardless. Color also plays a big role here - the emerging markets, the ones that are growing, are BRIGHT RED!, while the ones we're apparently supposed to ignore are more subdued colors.

"The radius of the 2016 pie is at least three times larger than that of the 2006 pie"? You sure? By my measurement, it's slightly less that 2 times, which is correct, if you forget to assign totals to area instead of length.