Reader Jordan G. wasn't impressed by an attempt to visualize medal counts by country and sport in the Olympics over 112 years by Christian Gross at Visualizing.org (link). 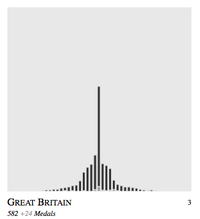 The author chose to use the metaphor of "mountains" to portray the cumulative medals earned by each country. Each country is treated as a unit in a small-multiples-style presentation (see right). The bars represent different sports, and they are arranged as if arranging lanes in a swimming contest, with the largest haul in the middle, and second largest on the left, third largest on the right, etc.

This exercise highlights two important considerations from the designer's perspective.

The first is scaling. You'll notice that the first page (for Athens, 1896; excerpted below) is essentially unreadable. This is because the designer uses the same scale for every single page, and because he is plotting the cumulative number of medals over time. These two decisions mean that the initial pages would have much lower values than the latter pages. 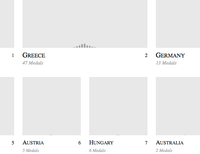 It also means that on other pages, the extreme values walk off the edge of the chart area. (I think the reason is that if the scale has been tailored to present these extreme values, then pretty much every chart that doesn't contain extreme values would become unreadable.) 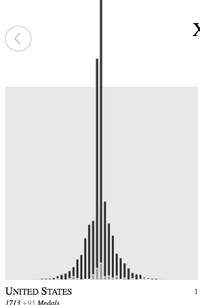 The choice of making countries units (discussed further below) makes for some awkwardness in latter years as the medals became more spread out among more countries. In the first Olympics, only 10 countries won any medals but in 2008, 127 different countries won at least one medal, among which 50 countries or so had never won more than 20 medals in all sports combined. This skewed distribution causes the designer to break one of the cardinal rules of small multiples, which is that the design of each unit must be the same, with only the data varying. Here, the top countries have their data plotted on a different scale from that of the other countries, as we can see from the different sized squares. When you mouse over a particular bar for a particular country, that sport is now colored red and corresponding bars are highlighted for every other country -- the problem is that the scales are not the same so the lengths of the bars give us misleading comparisons.

The second consideration is pagination. The data set has three dimensions: country, sport and time. In this presentation, the designer places sport within country within time. Put differently, the time categories are placed furthest apart - in fact, the reader must load a different page to see the evolution from one Olympics to another. The sport categories are placed closest to each other, in the same chart unit and so it requires the least effort for the reader to compare the number of medals won by the US in athletics (say) compared to gymnastics.

This goes back to the top corner of our Trifecta Checkup. What is the most important question the designer is trying to address? If it is the evolution over time, then the time dimension should not be placed furthest apart. If it is comparison across sports, then the sport dimension should be placed innermost.

For me the country dimension is the least important because everyone knows the US typically wins the most medals, and the top 5-10 countries are quite stable. Within a sport, I might wonder if certain countries are dominant in certain periods, and if certain countries started developing particular sports from a certain time period onwards. In this case, I'd place country and time within sport.

The following gives an idea of an alternative way of visualizing this data: 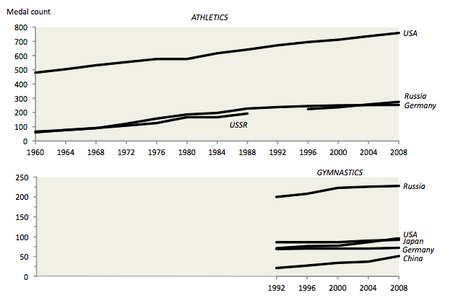 Apologies for not completing the dataset. Both charts are missing countries as well as years of history. But you can see where I'm going with this. There would be one chart per sport.

In gymnastics, we see that the US and China are latecomers, Russia has been the superpower until recently while Japan and Germany have stagnated.

Thank you for posting this! One of the other problems I had with this visualization is that the shape chosen to represent mountains gives the impression that what's being presented is a histogram of data with central tendencies. In this design, cleverness was given a greater priority than communication.

And I think the designer should get some acknowledgement for his cleverness - but overall, Visualizing, and the other several websites that gave praise to this work, performed a disservice to the field of visualization by awarding top honors to it. In my opinion, there is a fundamental disconnect between what is considered a good visualization by the public and what research tells us a good visualization should look like. The institutions who purport to analyze and distribute quality visualizations should be held responsible when they proffer works that deliver flash and cleverness but inhibit visual insight. In a recent correspondence I had with Stephen Few he wrote "the battle for the minds and hearts of data consumers rages on." When I see awards given to work like this, I can't help but feel we're losing the battle.