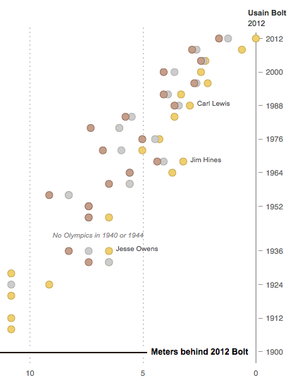 Why do you call line charts bumps charts, and scatter plots dot plots? These are all different things.

Derek: turn this chart sideways so the time axis runs horizontally. Would you call that a scatter plot?

That annoyed me as well. I only discovered that it disappears if you move the cursor away from the video after I had watched it, which isn't all that obvious. (Using Safari on a Mac.)

Kaiser, sorry, I meant to reply seriously to your question nearly a year ago, but work got in the way.

Would I call a time series a scatter plot? Absolutely yes. All time series are scatter plots to me, because time is a quantity, not an ordinal series of categories. Years can be presented as bins of time (which is why you can have a bar chart of years), but I'm sure your years scale doesn't belong in that tradition, even though you elided some years. More importantly, the dots are the record of single events, not an aggregate across events. Had they been "the mean of winning times in the year 19xx", that would have been a dot plot, though I would then have kvetched about the year axis looking suspiciously scalar.

This is something that annoys me about some BI apps, or at least the models users build with those apps, that they fail to appreciate time is not a set of bins. That approach leads to "time stamps" that are treated as categories even though they are specified down to the second, and there are no tools for subtracting times from each other to get intervals between two times, without resorting to convoluted text functions (Business Objects 5.0, I'm looking at you). MS Excel pivot tables gets it right, funny enough. Time is a quantity, and you can perform arithmetic on it. To arrange data into intervals of months or years, you Group the times, whereupon they become categories.