Junk Charts
Welcome Twitter About Book Blog RSS
New but is it better?
Spacing out on the space race 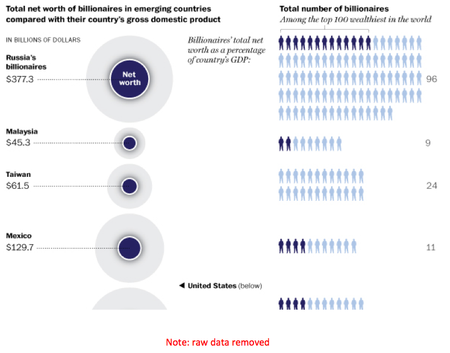 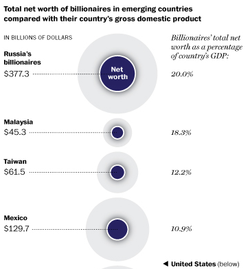 Comparing Net Worth to GDP is--quite literally--a textbook example of incomparable quantities offered in the opening of the first chapter of Street Fighting Mathematics, by Sanjoy Mahajan. From page 2:

A valid economic argument cannot reach a conclusion that depends on the astronomical phenomenon chosen to measure time [referring to how GDP is measured over a year, an arbitrary if convenient amount of time based on an astronomical phenomenon]. The mistake lies in comparing incomparable quantities. Net worth is an amount: It has dimensions of money and is typically measured in units of dollars. GDP, however, is a flow or rate: It has dimensions of money per time and typical units of dollars per year. (A dimension is general and independent of the system of measurement, whereas the unit is how that dimension is measured in a particular system.) Comparing net worth to GDP compares a monetary amount to a monetary flow. Because their dimensions differ, the comparison is a category mistake [39] and is therefore guaranteed to generate nonsense.

Agreed on the design comments. I still think the GDP to personal net worth comparison is valid. While it is true that the sum of all personal net worth and GDP is apples to oranges, it does make for an interesting comparison when you consider a scenario where an individual might step into a consortium to guarantee a sovereign debt issuance. That could create some interesting concentrations of power.

I am the Watercooler editor at Before It's News (beforeitsnews.com). Our site is a rapidly growing people-powered news platform currently serving over 3 million visitors a month. We like to call ourselves the "YouTube of news."

We'd love to republish your RSS feed on our site, with a link back to yours. We don't censor or edit work. Our visitors would enjoy your content and getting to know you. It's a great opportunity to spread the word about your work and reach new fans. Posting on Before It's News is 100% free.
Looking forward to hearing from you!

Where is the UAE? There are a ton of oil rich tycoon billionaires out there!

Also, I would think America had a few too, what with lenders, banks that provide business loans, and Bill Gates :-P

Your work is totally appreciative and informative.

Info is out of this world, I would love to read more.