Reader Joe DiNoto sent me to the following National Post (Canada) chart via Twitter, complaining about the circles. (The full chart is found here.) 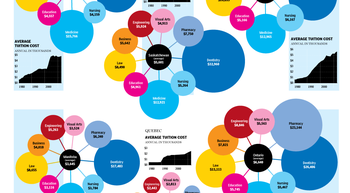 This chart is supposed to show that the students in Quebec are wrong to go on strike against a roughly 10% increase in tuition fees because the cost of education in Quebec is dwarfed by those in other provinces. This particular message is visible by virtue of the small amount of space occupied by the Quebec "flower" relative to other provinces.

However, to convey that message would require only a chart of the average tuition of the seven provinces. The dataset here contains a lot more information than just the average: it has the tuition by major. But, does the general pattern of relative tuitions apply to individual majors? This chart type (a disguised bubble chart) does the reader few favors. (At least, the designer managed to keep each "petal" at the same angles; otherwise it would make our lives even harder.)

In order to bring out the tuition by major comparison, the following set of dot plots helps:

The purple dots are Quebec tuitions. The gray dots are the remaining provinces. We find that Quebec is at the bottom of the cost scale for every major. We also learn that the variance of tuition for dentistry, medicine, and law is very high. Surprisingly, the business degree is rather cheap - maybe the demand for it up north is lower?

Great use of a dot plot. Nicely done.
Allows easy comparison between majors and provinces at the same time.

This dot plot is definitely an improvement over the petal design in facilitating understanding. As you relate, it is easy to see that Quebec is the least costly in nearly every major. Visual Arts is the only major where they come in 2nd.

Considering the rest of the data, another interesting story that could be told, simply by coloring another set of dots, is that Ontario's costs are near the top in every major, and ranks as the most costly in all but three. It appears, from this perspective, that Ontario may have more reason to protest than Quebec.

Finally, Saskatchewan must have one incredible Dentistry program to warrant the highest cost in the Nation.

One should almost always avoid using circles to display data. Here are a few reasons why (anti-circle rant follows):
1) Circles are limiting. A good chart should allow the viewer to work with the data. That is, the reader should be able to use a ruler/finger/eye/folded piece of paper to measure the screen or printout and make calculations. It's fairly easy to eyeball or measure the difference in height between two histograms, for example. Comparing the area of two circles is much harder.
2) The is no "standard" for circles. Sure, we *expect* that the area of a circle represents the quantity of interest, but are we really sure? There are definitely plots out there where the radius represents the quantity of interest. This is important because...
3) Areas are misleading. Our eyes are good at eyeballing lengths, not areas. So we will "naturally" compare the diameters of two circles, even if the quantity of interest is the area. This means the impact of the chart will be way way off, because of the squared relationship. Circles will minimize the apparent difference in quantities for this reason.

So, in general: avoid plots where there is a non linear relationship between some aspect of the plot and the quantity of interest. If one must use areas, then use squares, not circles, so that the user can more easily compare different elements of the plot.

Even though the dot plot is a major improvement over the flower graph, it is still a reminder that any graph can be deficient with incomplete data.

In this case, it miserably fails to take into account the much higher tax rate in Québec, where money is used for getting those low tuition fees.

So, go on. Raise your taxes and lower your tuitions, then we'll compare apples with apples.

Nice post. However, the proposed tuition increase is not 10%. It is an additional $325 (give or take, the raise in under negotiation) per year, for each of the next five years. Total increase = 75%.

Hi - Late post but... Went to B-school in Canada. We have many churn undergrad programs that save actual graduates tuition on the backs of the half to two thirds of entrants who flunk out by junior/senior year. It is my understanding the U.S. schools often promote study of diverse topics for these years, potentially acclimating students for the remaining two years of Organizational Behaviour and Statistics (etc.) that could drive early drop-outs.