No sorting and lack of structure undermine a chart 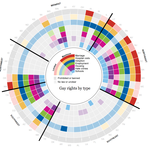 Reader Daniel L. isn't impressed with this page of charts about gay rights in the U.S., from the Guardian paper (London). (link)

The use of circles to organize data has a long history, stretching back at least to the Nightingale rose, which turns the time dimension into a circle. Andrew doesn't like this concept (e.g. here), neither do I.  Here is something similar by McCandless (link) that has appeared on this blog.

Take the following set of charts showing the legislative differences by region of the country.

Since states within region are categories with no order, there is no easy way to order the states. This is made worse by the categorical nature of the other variable: the legislative posture on marriage, civil union and domestic partnership is very messy data with no order either.

The regions can be sorted reasonably by the "average" permissiveness but this chart shows no concern over sorting at all.

About the only easy read from this set of charts is the observation that the Northeast states are most permissive while the Southeast statements are most restrictive. Anyone who has casual exposure to this social issue knows this without needing a chart.

The key to clarifying this chart is to clarify the underlying structure, particularly the structure of the permissiveness variable. Dissecting the data reveals that there are only five possible postures (Banned all three rights, Banned marriage but allows one of the other rights, Allow civil unions, Allow marriage, and No information).  The following data table conveys the data with minimal fuss:

This table may convey the basics with minimal fuss, but I like the wheel/circle because it allows you to compares state to state at a glance (maybe it would be more useful if you could move two states' columns adjacent to each other?) and it also allows you to quickly single out one state and get information on all their policies. The table doesn't do that, and would be large and cumbersome if it broke things down at the state level. I do agree, though, about the many smaller graphs broken down by policy and region...not useful.

I disagree with your complaints about this chart. The binning by region is very helpful in this chart. It makes it clear what a standout Illinois is, and how, despite allowing gay marriage, Iowa is still pretty regressive on gay rights. The positioning of states is roughly geographical, and therefore already meaningful to readers; I am not sure how sorting would be an improvement.

I do think there are possible improvements, but that table has none of the impact of the chart. If you're trying to communicate geographical patterns, the table is a failure.

Raphael and Anna: the table does "bin by region" and it is broken down "at the state level" so I'm not sure what you mean by your complaints. And how is the positioning of states "roughly geographical" when Arizona is to the northwest of California and the Northeast region is to the left of Southwest?

I thought the original visualization was great; it simultaneously clarifies broad spatial patterns by grouping states, helps you determine while states have which features (radially), and which states are associated with which features (laterally).

Your table is a mess.

Your table is a data reduction. It's useful but doesn't convey the same depth of information that the circle chart does. The circle format in this case lends itself to easy navigation and cross-referencing, which as the first commenter notes would require many tables to be conveyed in that format. But there is a further and more significant aspect to this particular chart which is it's interactivity. That allows people to 'play' with the data with relative ease and potentially start to draw connections. If a chart engages people with data more than they might otherwise, then something valuable is gained even if it comes a slight cost in clarity.

For once I have to disgree with you. I'm with the other commenters on this particular example.

And
"Anyone who has casual exposure to this social issue knows this without needing a chart"
may be true in the US, but the Guardian is a British paper with wide international readership, most of whom will not be familiar in detail with the niceties of odd bits of US state attitudes and legislation.

Kaiser: the table gives the individual states' policies, yes, but not in a format where it's easy for me to say, "Hmm, where does my state Illinois stand? I see. Okay, what about my neighbor Iowa? What about California?" The circle is easy for the eye to follow and to jump around to different states, which seems to be the point of the visualization - where does each state stand compared to other states (and regions to other regions as well)?

One of the rarer times I disagree with your complaints. I thought the original visualization did a great job presenting an overview analysis of a complex set of information. As far as structure goes, I thought it was done to be especially suitable for quick reads.

The large chart provided sort by state and by population, which provided a great data point and comparative angle. Since as we know, more states doesn't mean more people necessarily. Would more sorting be good? possibly.

I actually liked how they treated the sub-topics sections. They are essentially providing reporting analysis and conclusion with texts and quick-read charts. So it's not just throwing up data on a page and let people figure it out what it means.

As a reader, I appreciate that I could just skim the sections and understand the points already.

It's great to hear how you see this. I'd encourage you to think about what the purpose of this graphic is. For me, I want the graphic to tell me what different modes of responses exist to the gay marriage issue, and then the geographical distribution of such modes. It seems that many of you are interested in a dictionary-lookup of what your own state is doing.

I think the table has its advantages, but I think a standard heat map/ matrix can handle this data quite well.

The failure of wrapping a matrix around a circle like the original visualization are well established.

I made a quick rough attempt at a handful of approaches to the same data set, using Tableau Public:
http://public.tableausoftware.com/views/GayRightsbyStatealaGuardian/HeatMapHorizontal

Matrix runs from red (prohibitions) through grey (no laws) through shades of blue from limited to maximum rights.

I think this layout facilitates easy comparisons far better than the circular layout, and with more time and effort could clearly be made to be more attractive and interactive.

I think the circles are pretty bad, full of silly metaphors. Why not just a map with one observation (color or gradient) per state?

While the wheel may be visually striking, it is not easy to read. I tried to analyze my own state of Ohio, starting with the outer rung. When I look at the top spot, I see cross hatches in gray – alone this tells me nothing. So I must move my eyes to the key. Immediately, I am attracted to the grey hatches, “prohibited or banned.” This makes sense: Ohio’s constitution forbids homosexual marriage. But as I look around the wheel to the Northeast I see that there are states that are both light-red (“limited”) and (“prohibited or banned”). Now that really makes no sense. If an action is given recognition under the law, however limited, it cannot be said that it’s “banned or prohibited.” I don’t get it.

My eyes are then attracted to Ohio’s third rung. Again, by itself this color encoding and its location immediately mean nothing. So then my eyes go to the legend – and because our brains are pretty good at matching colors – I match the light blue to the bottom of the legend, schools. That’s not right and as I look back up to Ohio I realize that it’s not right. So now I must match again.

@Jordan - The understanding that I came to after looking through the rest of the pages of information is that the colored and hatched sections refer to situations where, for instance, marriage is banned but 'civil unions' are allowed.

Thus, the particular category is banned, but something similar is allowed, which could be argued to cover both 'banned' and 'some rights' for the same category.

It's not a very good approach, IMO, but that's the way I understand the chart to work.

I don't disagree that gay people deserve equal rights. I just feel we have more important issues to be talking about like people starving and people's health. How gay rights gets talked about more then people's health is beyond me.