Is that my third leg?

We look at another idea from the visualization project "Gaps in the US Healthcare System" (link). This was a tip from reader Jordan G. (link). One of the bright points about this project is the conscious attempt to try something different although the end result is not always successful.

A tree-like branching chart was used to represent cancer death rates, broken down by racial group, gender and type of cancer, in that order. 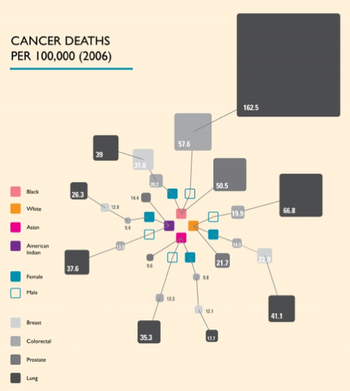 The tree structure loses its logic after the race and gender splits. Why link different types of cancers (the gray squares) together in a sequence? Stranger still is the existence of a third branch coming out of every race node (the four closest to the center). One branch is male, the other branch is female, what's the third leg? It appears to be prostate cancer which is male only--why doesn't it go with the male branch?

It's not easy to find the connection between what's depicted here, and the idea of "gaps" in the US healthcare system. I think the question is ill-posed to begin with.  The rate of death reflects both the possible differential quality of healthcare between groups and the differential incidence of cancers between groups so no visualization tricks could be used to find reliable answers to the question being posed.

The chart fails the first corner of the Trifecta checkup. The chart type also does not fit the data.

The following chart plots the same data in a Bumps style.

I separated the male and female data since certain cancers are limited to one gender, and the gender difference is not likely to be the primary interest. The gender difference, incidentally, is clearly observed: the male death rates are generally about twice as high as the female rates of the same type of cancer, except for colorectal.

In terms of the "race gap", we find that black death rates are generally quite a bit higher than white death rates, especially for prostate cancer but except for lung cancer in females.

Asians and American Indians have practially the same death rates but in both cases the sample sizes are small.

The raw data can be found at the CDC website here.

I have to once again question your choice of chart type on the rework.

While it is certainly better than the original, you once again have a line chart connecting categorical rather than sequential data.

A bump chart, like any other line chart, assumes a start and an end, which this data does not have. The pattern formed by the lines are very striking, but in this case are meaningless and therefore obfuscate the point of the visualization.

A column chart or dot plot would be more suitable methods of displaying the data, by far.

I love the work that you do here, but I cringe every time I see this...