Breaking up a time series

My friend Augustine sends me to this press release by Kantar Research, via PaidContent (link).

This article expresses alarm that advertisers have cut their spending on online advertising in Q4 of 2011, especially on search and display advertising. An important person is quoted as saying that a shift to mobile ads explains this phenomenon.

The labeling on the following chart doesn't help: 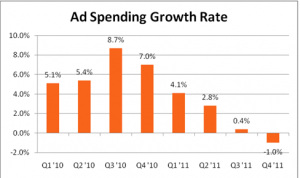 Comparing Q4 2010 to Q4 2011 (and Q4 2009 to Q4 2010) is one way to do a crude seasonal adjustment, and I'm assuming that's what they did. If so, then each rate can be considered an annual growth rate for a particular quarter and the following chart would bring out the dramatic decline in a much clearer manner:

Instead of starting another debate about line charts versus bar charts, I show them both, but continue to recommend the line chart.

In the original chart, either the data labels or the scaffolding (the vertical axis and gridlines) should be removed. If the data set is entirely printed on the chart, the designer expresses no confidence in the graphical elements.

The curiousity in this press release is the absence of mobile ad data. Apparently the key message of the article is not supported by the data set, which makes this a case of "story time". (I write about story time in the sister blog.)