Dona Wong, whose graphics book I reviewed two years ago (link), has recently joined the New York Fed to lead an effort to visualize data. This is exciting because consumers are unlikely to learn anything from Excel spreadsheets, HTML tables, etc. which are the typical formats of public data.

One of their efforts is visualization of mortgage delinquency data in the Tri-state and Long Island regions (link). This animation reminds me of the CDC obesity map, to which I gave a positive review in 2005 (link). This type of chart is great for revealing the evolution of a metric over time and over space. The sliding control is a very nice extra touch. This allows readers to freeze-frame the map and examine the details.

I sent Dona a few comments:

Let's start with the last recommendation. Any given delinquent mortgage will move between the different states of delinquencies over time, and so it is useful to look simultaneously at the evolution of all three levels of problems. In particular, a reduction in 90-day delinquencies may mean that people are starting to pay off their loans, or it may mean that some of these mortgages have become foreclosures.

In Long Island, for example, the proportion of loans 90-day delinquent appeared to have decreased from Jan 2010 to Dec 2011 but as the second set of charts showed, the reduction was probably because many of these loans turned into foreclosures. 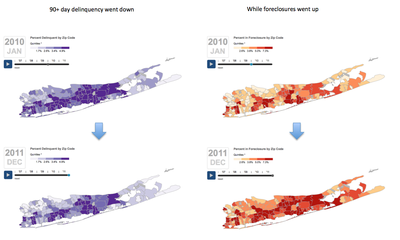 The second recommendation requires a bit of explanation, and peering behind the scenes. The legend is shown on the right (this is for Tri-State, foreclosures).

The easiest way to read the chart is to ignore the quintiles, and think of the colors as representing different ranges of delinquency rates within a county.

The quintile is a description of how the designer divides the counties into five equal-sized groups (corresponding to the five shades of colors). All the counties are sorted in increasing order of delinquency rate from the lowest to the highest. The bottom 20% of counties are classified as Quintile 1, the next 20% as Quintile 2, and so on up to Quintile 5 (the worst performing counties).

Each quintile represents a range of delinquency rates. For instance, in the above example for Tri-State foreclosures, Quintile 1 are counties with foreclosure rates between 0% and 1.3%. My point is that it is sufficient for readers to know the range of foreclosure rates associated with each color. Sometimes, introducing technical terms is more trouble than it's worth.

There is another reason why I would hide the quintile information if I were the designer of this chart. It's because there are different ways to define quintiles, and it takes too much time to explain your choice. 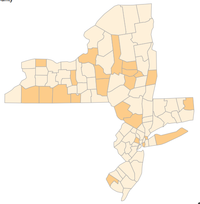 Notice that the maps of 2007 are very light colored across most counties (see example on the right) and the later maps are much darker colored. This means that my description above is too simplistic: Quintile 1 is not really the best-performing 20% of counties - it contains the best-performing 20% of county-month-year combinations. The designer starts with a list which contains an entry for each county for each month of each year, instead of a list that contains one entry for each county.

Alternatively, one can choose to take each month as a separate dataset, and then divide the list of counties into quintiles. The maps would now look totally different because in this rendition, all five colors will feature in equal numbers in each freeze-frame. This view allows readers to know at any moment in time which are the best counties and which are the worst. However, it has the disadvantage that the range of delinquency rates defining each color would shift from month to month. In this version, the legend should be described in terms of quintiles rather than rates.

In the end, I think the way this chart is constructed makes sense. My little suggestion is to not mention the quintiles at all and let that work in the background.

When reading complex charts like this, you may not realize the number of decisions that have already been made. This is a great example of how such decisions affect the appearance of the final product.

Come see this panel on data visualization in NYC

The New York Public Library is organizing a panel on "What makes a good data visualization?". This is happening on April 4 in New York City. I'll be on the panel. There are panelists from many different disciplines so I expect a lively dialogue.

The link to register for this free event is here. 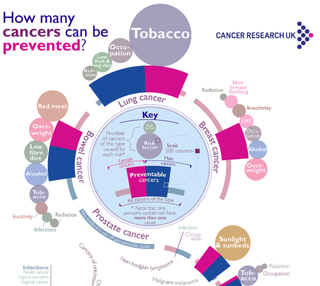 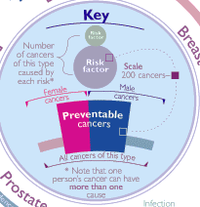 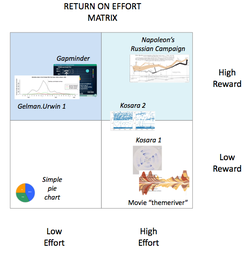 Guess which day I made this chart

ESPN Magazine issued a special analytics edition to ride the Moneyball bandwagon. In an article talking about the disappearing midrange jump shot from college basketball, they put out this chart:

In the caption of the chart, the key conclusion is: "As you can see, threes reign outside the lane." Well, we must be blind, since that conclusion is very difficult to draw from what we see. A number of reasons contibutes to this failure:

The problem of this type of "racetrack graph" has been discussed here before (see here or here). By using ellipses rather than circles, this chart makes things worse. Now, we can't even imagine where the center of the circle is to judge the angles.

The following line chart has a few revelations: 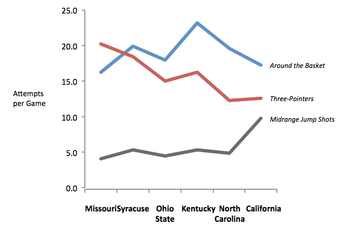 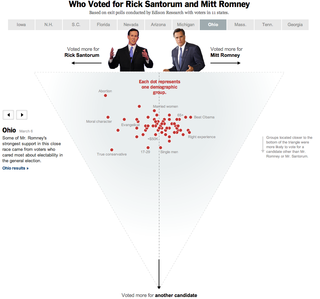 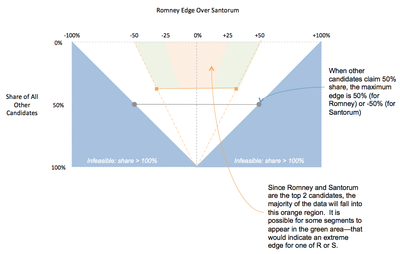 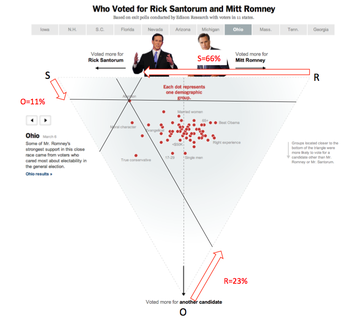 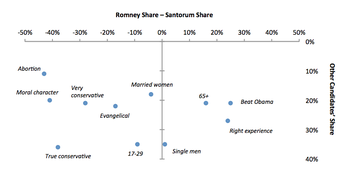 Reader Julien D. found this collection of Venn diagrams by Stephen Wildish (link), including this one: 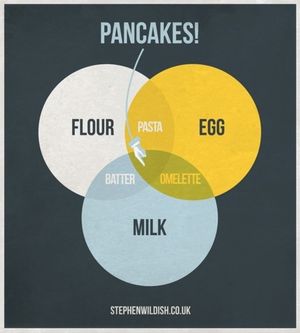 Conceptual colors, negative proportions, mysterious axes, and all that

Reader Jordan G. found a different-looking chart on visualizing.org, of which I excerpted the following:

This part comes from the bottom right corner of an entire page of charts (link). The title of the entire project "Gaps in the U.S. Healthcare System" may give some hints as to what the designer was intending to portray. Looking at this part by itself, the reader is missing some information:

The first question is answered by the legend of the post, situated on the far left. Simply by printing the labels for racial groups on this chart, the designer would have saved readers the effort to look for this information.

The second question is not addressed anywhere on the chart but most likely, the percentages represent proportions of adults over 50 years old who ever received the three types of -scopies. The mirrored nature of the vertical axis is odd. As much of the chart is above the zero-proportion line as exists below the line. What does negative proportions mean?

Because I couldn't figure out the answer to the third question, I can't interpret this chart at all. I see that the proportion of adults fluctuates from left to right for every racial group. But with what is the proportion varying? It also appears as if Asians only live in urban areas.

Jordan asks a question about color choice here that is worth discussing.

In this chart, the author chooses to use a color coding system to represent race (pink squares = African Americans).  I have seen other charts use “actual” colors to represent race (white = Caucasian, black = African American).  I could see some audiences taking offense at these different color representations, especially where the color chosen has been used pejoratively in the past (like “red” for American Indian, “yellow” for Asian).  What would you consider an effective and appropriate way to encode different races on visualizations?