Does this need fixing?

Reader John B. tried to improve Minard's famous chart of the Napoleon Russian campaign (link). Ed Tufte declared this chart the best ever. 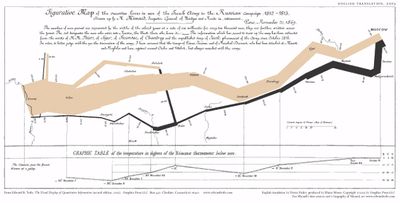 Here is John's alternative. The biggest change he made was to discard the geography and emphasize the chronology. 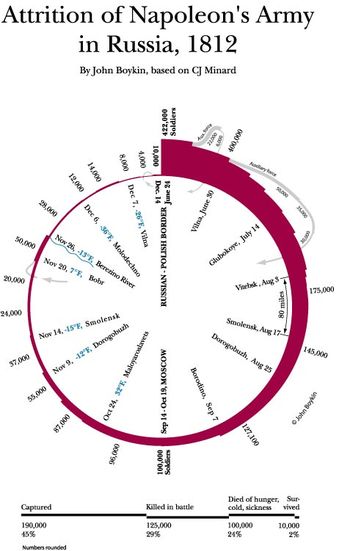 John also points us to this page which includes a number of different re-makes of the famous chart. (link)

The meaning of most

Megan McArdle started the war on infographics (link). And reader Danielle A. contributes this example, from KissMetrics. 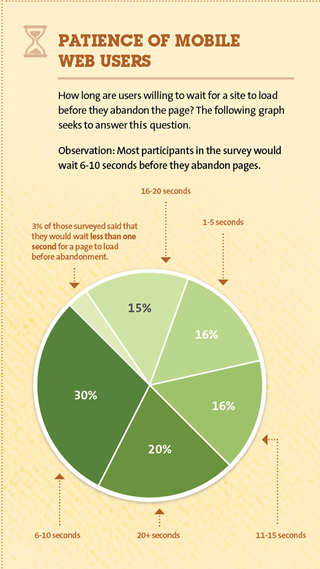 This is one part of a big infographics poster. Needless to say, a bar chart renders this data much better: The categories are sensibly sorted, and useless tinges of color removed.

But I want to draw attention to their conclusion:

Most participants in the survey would wait 6-10 seconds before they abandon pages.

Now we know writers of opinion pieces in the major newspapers have long lost control over the titles of their pieces. Is it true that graphic designers have ceded control over their conclusion statements?

It would appear so. The category being labeled as "most participants in the survey" accounted for 30% of the respondents. When is 30% considered "most"?

Also, surveys are typically tools for generalization so we expect conclusions about the general population of mobile users. Here, whoever wrote this conclusion timidly restricted the remark to "participants of the survey". This is probably an oversight because in other panels, they talk about x% of consumers or y% of mobile internet users. If the survey was probably designed and executed, they should be confident about the whole population, not just the sample.

Finally, nowhere on this poster can you discover which survey this data came from. We have no idea what the sample size is, nor the margin of error.

Necessity is the mother of invention

When there's a need to vow audiences with smart data analysis, there's invention.

Let's start with the U.S. home ownership data. The total occupied homes are subdivided into owner-occupied and renter-occupied. Thus, in any given year, we can compute the proportion of homes that are owner- or renter-occupied. We use blue for owner and red for renter, as follows:

Just to confirm, if we superimpose these two charts, we see that the proportions add up to 100%. One chart is the mirror image of the other: 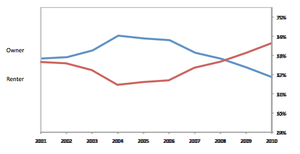 Now we have confirmed the data is okay, we pull the charts apart. We change the scale of the renter chart so that the change over time is more clearly displayed. Since the home ownership bubble burst, it's the rental market that has grown. 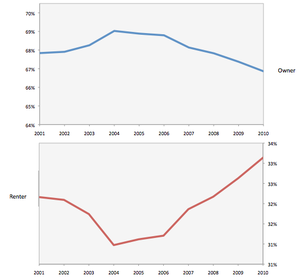 It's time for some magic! We superimpose the charts again to obtain this: 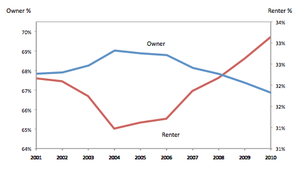 [Ed: The remainder of the post below is modified from the original version based on reader comments]

The chart designer managed to make the two data series look different even though one series is the mirror image of the other.

The inspiration of this post came from reader Leanne C. who submitted this MSNBC chart: 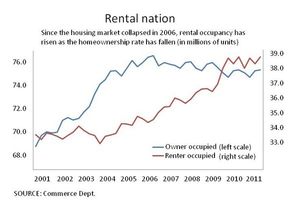 Initially, I mistakenly assumed what is plotted are proportions. It just so happened that the total occupied units in the U.S. is in the 100M range and the owner v. rental are split 70M / 30M. I looked at the left end of the chart, and saw in 2001, about 33 of rental and about 69 of owner, which happens to add up to 100 (with rounding error). But if I had looked at right-end of the chart, where rental is 39 and owner is 75, then it would have been clear it's not adding up.

In any case, this chart looks different if we make the scales the same. In the following, each unit of both axes represents 2M units. There really is no justifiable reason why the scales should be different given that they both measure the same objects. 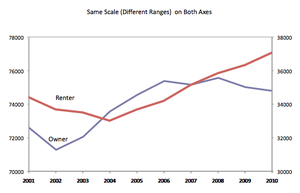 But using different ranges on each axis also presents a challenge: it is tempting to read meaning into the gaps between the two lines but these gaps merely reflect the choice of axis ranges.

Instead, we should convert all these units into growth indices. Let 100 be the year 2001 units. The following chart then shows what's really going on in housing:

Rachel features some poor bubble charts on Stats Chat, which is the blog of the Auckland Statistics department. (here, and here)

The JMP blog takes on the challenge of visualizing European debt data (link). We discussed this some time ago (link). The difficulty of this data set is that for each pair of countries, there are two values, and each country can simultaneously be lending to and borrowing from the other. 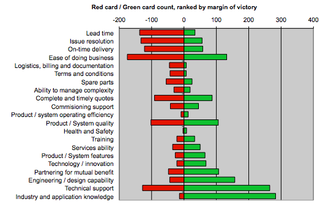 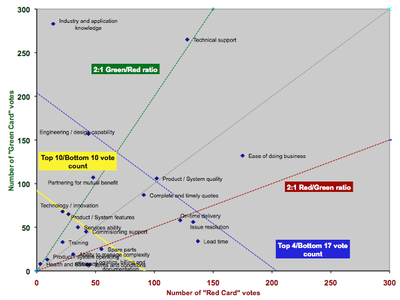 The "data" corner of the Trifecta

In the JunkCharts Trifecta checkup, we reserve a corner for "data". The data used in a chart must be in harmony with the question being addressed, as well as the chart type being selected. When people think about data, they often think cleaning the data, processing the data but what comes before that is collecting the data -- specifically, collecting data that directly address the question at hand.

Our previous post on the smartphone app crashes focused on why the data was not trustworthy. The same problem plagues this "spider chart", submitted by Marcus R. (link to chart here)

Despite the title, it is impossible to tell how QlikView is "first" among these brands. In fact, with several shades of blue, I find it hard to even figure out which part refers to QlikView.

The symmetry of this chart is its downfall. These "business intelligence" software are ranked along 10 dimensions. There may not be a single decision-maker who would assign equal weight to each of these criteria. It's hard to imagine that "project length" is equally important as "product quality", for example.

Take one step backwards. This data came from responders to a survey (link). There is very little information about the composition of the responders. Are they asked to rate all 10 products along 10 dimensions? Do they only rate the products they are familiar with? Or only the products they actively use? If the latter, how are responses for different products calibrated so that a 1 rating from QlikView users equals a 1 rating from MicroStrategy users? Given that each of these products have broad but not completely overlapping coverage, and users typically deploy only a part of the solution, how does the analysis address for the selection bias?

The "spider chart" is, unfortunately, most often associated with Florence Nightingale, who created the following chart: 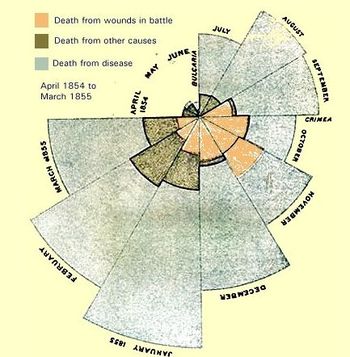 This chart isn't my cup of tea either.

Also note that the spider chart has so much over-plotting that it is impossible to retrieve the underlying data.

Where do we look?

It's probably not the worst we have seen. The biggest problem with this chart is that there is so much going on it's hard to know where to look! This is a huge no-no for a site like Business Insider, which is in the business of sensationalizing the most trivial things.

The first fix should be to shine a light on Mark Zuckerberg. The message of the chart is how the Facebook IPO would instantly make Zuckerberg one of the top 10 richest in America. Poor Mark is lost in the crowd here.

The second fix is to get rid of the data labels, and the gridlines. It won't matter to readers whether Mark's wealth is $25 billion or $24.7 billion. The vertical axis already provides the needed information.

Some may be offended by the color of money although I can handle it.

PS. Dear readers, I have received many submissions recently. Please be patient as I work through the backlog. 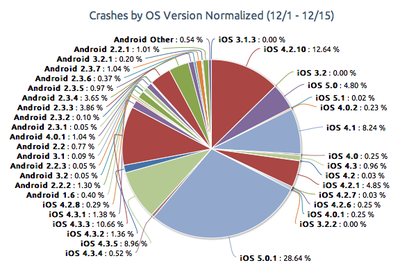