Why were they laughing?

Felix Salmon linked to this whimsical chart, featuring the frequency of laughter at Federal Reserve's FOMC meetings on the lead up to the bubble. 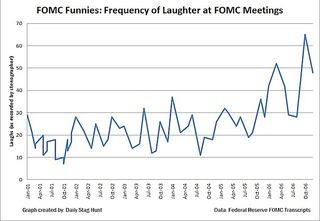 The Daily Stag Hunt blog originated this chart (link), and they juxtaposed it with the Case-Shiller 20-city home price index to make the case that the Fed members were laughing all the way to, er, the McMansion. There is little doubt that the underlying narrative is correct, that the Fed governors did not see the bubble, and failed to respond to it appropriately. It is both tempting and amusing to find correlations of this type that would make this point clear.

But as I have discussed elsewhere, one must be extremely careful when looking at correlations of time-series data. Consider the fact that the FOMC laughter shows a unidirectional (up) pattern throughout the period being depicted. Consider, next, that for much of this period, the U.S. (and much of the world) was riding a massive bubble. These two facts alone will guarantee that we can find hundreds of data series that will show very strong correlation with the FOMC laughter track. Pick up any economic data series from that era, whether it is home sales, mortgages, retail sales, stock market prices, and so on, one will find a unidirectional (up) pattern.

So we must dig into the data more to understand the real connection between FOMC laughter and average large-city home prices. 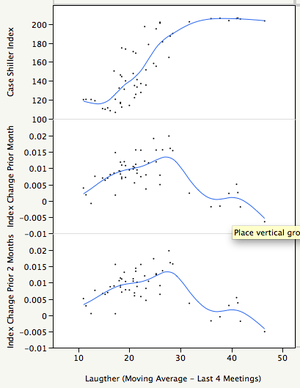 The top chart on the right shows the expected correlation between the Case Shiller Index and laughter. Note that the Case Shiller data is an index with Jan 2000 being 100. I used a 4-meeting moving average to smooth out the fluctuations in the laughter data.

Because meetings are 1 to 2 months apart, one should expect the participants to be reacting to the latest data, i.e. the change in Case Shiller index in the previous 1 or 2 months. What the top chart shows is something different: it's all relative to Jan 2000. (Hard to imagine someone at the Feb 2005 meeting mulling over the 80% increase since Jan 2000, rather than the increase since their last meeting.) Thus, I produced the middle chart, which is a scatter plot of the one-month changes in Case Shiller index against average number of laughs.

The case for strong correlation has disappeared. It now looks like the laughs were most acute when the home prices declined versus the prior month.

The bottom chart is the same as the middle chart, except that I looked at home price changes two months apart. We observe an identical pattern.

This pattern shouldn't surprise us because it's actually in the original charts. During the last few meetings of 2006, the index has already stopped rising while the laughter continued to grow. We didn't pay attention because we were mesmerized by the long period of steady increases on both data sets.