Long-time reader Omegatron tells us about this report card issued by ACLU on the liberal-ness of different potential candidates for U.S. President. (link to PDF) 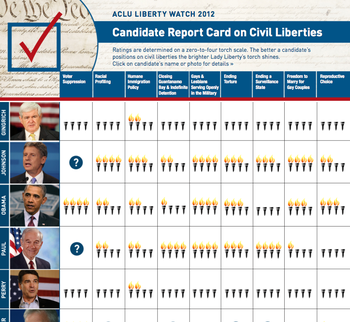 Perhaps because the designer realizes what a mess this chart is, he decides to greet readers with the legend text, typically shoved to the sides of a chart. "Ratings are determined on zero-to-four torch scale." This leaves me scratching my head because I see flaming torches and I see black torches without flames. Is it really an 8-point scale with half points?

Eventually, I realized that the torches without flames are part of the background of this chart, they are just placeholders to tell us up to four points can be scored on each issue. We should really be counting the orange flames!

Or perhaps the designer is cleverly differentiating zero torches, which is a negative rating, from big question mark, which indicates the candidate has no stated position, thus no rating on that issue. Keeping those two situations separate is very important. In the following reconstruction, instead of filling all of the zero-rating boxes (for which there are many), I leave zero ratings blank but insert a gray box to indicate "no rating". 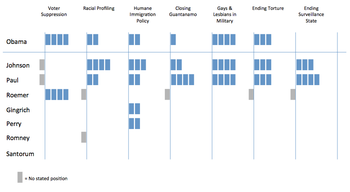 I haven't reproduced the whole chart with all the issues but you get the idea of where I'm going with it.

For those supporting liberal viewpoints, this is a deeply disappointing chart. It shows the Democratic President rates below some of the Republican (Libertarian) contenders on supporting liberal causes. It also says much that between Gingrich, Perry, Romney and Santorum, they accumulated a total of four points across all these categories, equal to what one candidate can earn in just one category. (This type of information becomes clearer when the candidates are sorted in a meaningful way, as opposed to alphabetical.)