Junk Charts
Welcome Twitter About Book Blog RSS
Santa is uber god, so says Venn
How to mess up a bar chart 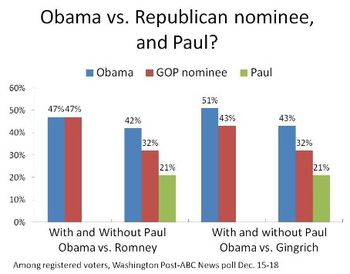 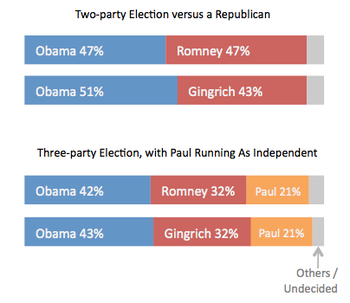 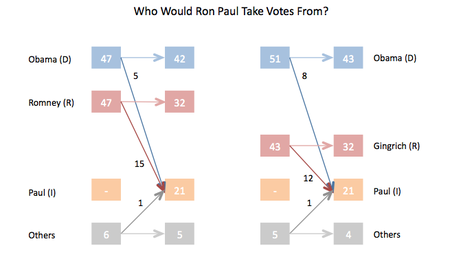 Isn't it easier to read, and just as informative, to simply put Paul between the others on the stacked chart? http://dl.dropbox.com/u/21362/two-or-three-party.jpg

I like the horizontal bar chart with labels on the bars. But I think it would be better keeping the bars grouped. Without the numeric labels, it's hard to tell that Obama's 51% beats Gingrich's 43%.

I like your use of a flow chart to track where Paul's votes come from.

It would be nice to see how an Obama vs Paul election would go too. That's probably a valuable piece of information.

To me the truly interesting piece of information is that both results with Paul as a spoiler are almost exactly the same: two of them are identical and two differ by one point.

None of the versions make this obvious, although the flow chart at least makes it reasonably easy to find.

I am not a fan of the flow chart, as used here. The story of this graph is told almost entirely with numbers; take them away and the reader would learn nothing, except that some colored boxes point to others; the graphical elements serve only as highlighting for the numbers.

I think that a web plot, or bipartite graph, in which the width of ribbons connecting each side of the graph represent the number of votes transferring from candidate A to candidate B, would do a better job telling the story. Such graphs can be created in R with the "bipartite" package, and an example graph (much busier than your example) can be found here: http://www.oga-lab.net/RGM_results/bipartite/bipartite-package/bipartite-package_001_big.png

Another alternative might be to combine a cladogram-style decision tree with your bar graph of vote percentages. Something a bit like: http://www.scielo.br/img/revistas/babt/v52n6/a14fig02.gif. This might be the best option, as it would tell both stories in a single visual, and encourage thinking about the election results in detail.

Adjusting the width of the arrows in the flow to show the relative sizes of the flows would make the chart clearer, and even better would be to adjust the sizes of the boxes too. (This would in effect give a bipartite graph as suggested by Tom Hopper.)

Do horizontal bar charts violate self-sufficiency principle? IMO, it seems so. Indeed, I would not be so sad. I've never been sure that self-sufficiency should be always a virtue, and this case would be an example.

Obama-Romney thing is really weird for me.
Hard to tell what i felt when Romney won here in Florida.
But i still think Obama is going to be re-elected.