I wasn't too happy with the previous chart (with a nod to zbicyclist). Here is another take on how 9-9-9 affects different households: 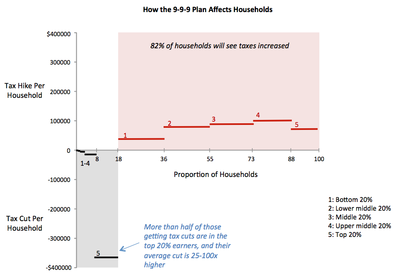 The challenge is how to convey the distributional effects of the tax plan in addition to its effect on averages. One can use expected values and do away with the distributional effects but doing that removes important information. The analysts show that in the top 20%, half of the households receive tax cuts while for the other 80%, at least 85% will see their taxes increased. 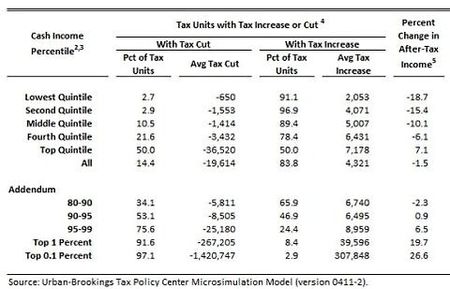 The data table is far too cumbersome to bring out the message. Here is a visualization: 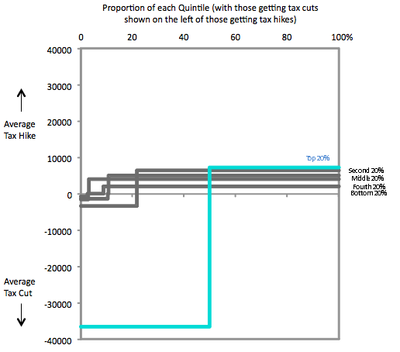 Things they don't teach you at Harvard

Numeracy and graphics apparently are not on the syllabus at Harvard, if one were to judge from this chart from the most recent edition of Harvard Magazine: 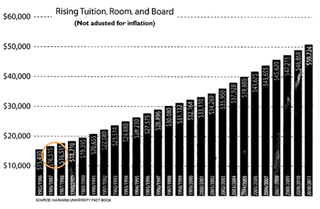 I added the orange circle to show a typo. But pretty much everything is wrong with this chart, from the sideways labels to the redundant use of data labels, column lengths and axis labels to plot the same series of data. (See the posts on self-sufficiency.)

Meanwhile, the insistent printing of five digits for the dollar amounts and the academic-year styling of the years are giveaways for innumeracy: the reliance on precision where it is neither useful nor necessary. Nothing at all is lost by rounding the amounts or shortening the years.

Most worrisome is the defiant announcement that the data is "not adjusted for inflation". One might as well replace that with "this analysis can't be trusted". When plotting a long time series, there is no excuse for not adjusting currencies for inflation. A dollar in 2010 just does not have the same spending power as a dollar in 1986. This is not a mere oversight; it's a major blunder, as revealed by the following junkart version: 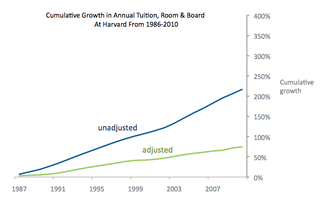 When the data is not adjusted, it appeared that tuition, room and board jumped by 220% between 1986 and 2010. However, when adjusted for inflation, the cumulative growth was only 75%. Without the adjustment, the reported growth was exaggerated threefold.

This is a good example to explain, yet again, why statisticians adjust data. The raw data is the blue line shown above. It shows the cumulative growth of 220%. This metric is misleading. One should ask: how big is this 220% growth, really? It should depend on how much more expensive other goods and services have become over the same period of time, shouldn't it? If the costs of groceries, clothing, fuel, etc. have all gone up by 200% or so, or if wages have also gone up by that amount, then the steep blue curve would not be so scary.

Of course, the excess growth is what the chart should be portraying.

The massive burden of pie charts

The world would be a better place if pie charts were banned. I respect the creativity that went to producing charts like the one below but surely, pie charts don't deserve that level of attention: 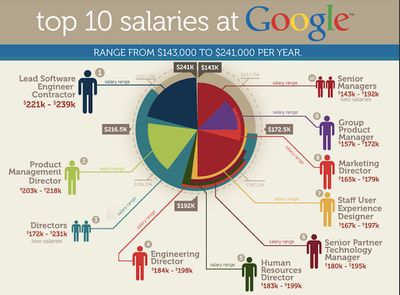 (Via Business Insider via Jobvine)

Here is the same information using a bar chart. 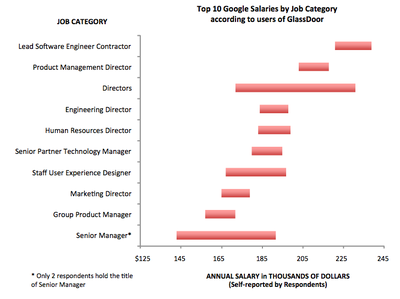 It's amazing how much extra stuff (colors, text, shapes, lines, labels, etc.) is needed when you use pie charts. 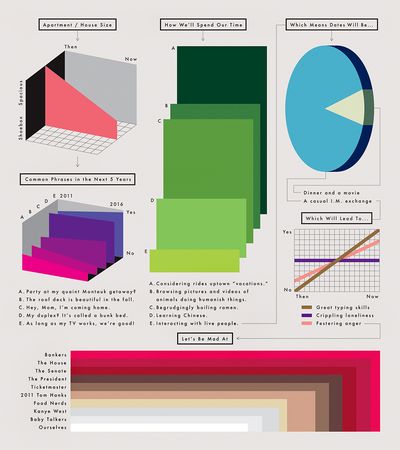 I feel like I know Steve Jobs even though I don't know him. I know him through the Apple products I have used through the years.

My first exposure to Apple coincided with coming to the States for college. Before the move, I had only ever used PCs, assembled by my Dad.

The first week of college, I found myself in a room of Macintoshes: in those days, they were off-white cubic blocks, slightly smaller than shoeboxes, with black-and-white, low-resolution screens. A "happy Mac" was always there to greet you. It only took 15 or 20 minutes to fall in love. In this time, I figured out how to use a mouse, the difference between single and double clicking, minimizing windows, file directories, etc. etc. When my friends tell me today that their six-month-old baby could instinctively learn to start their favorite game on the iPad, I believe them. I believe them because I experienced it myself.

1) Never take your eyes off the user experience.

The product is in service of the user. Charts serve readers. What are the key questions to answer? How can we help deliver their needs effortlessly?

Knowing the user does not mean relinquishing control. Apple products are very tightly designed. The email application on the iPhone works beautifully out of the box but it doesn't try to replicate every feature available online. It doesn't have to. Good graphics are never neutral; their producers have a point of view.

Distractors often mock Apple for false "innovations": they ask, why should a white iPhone cost more than a black one? how can rainbow-color iPods be considered an innovation? But we all react to beauty, to form. One shouldn't elevate form at the expense of function but function without form is hardly enough. The same holds for graphics.

A reader sends us to this chart published in the Telegraph (UK paper): 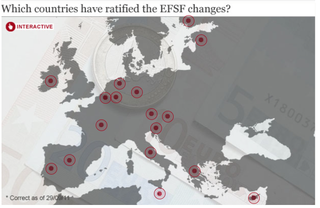 Which countries have ratified the EFSF changes?