The New York Times Magazine published an article about marriage infidelities, which I didn't read, but it was popular enough that they did an online poll to obtain some instant feedback from readers. The result was shown in this cutesy graphic: 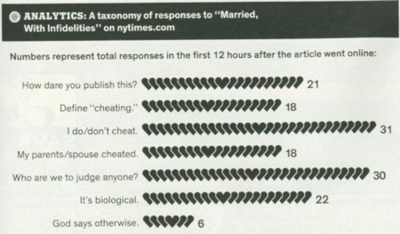 Note that they plotted the number of responses rather than proportion of responders even though all the numbers are between 0 and 100 and could easily have been misread as percentages.

This chart is another good illustration of the self-sufficiency principle. There is no need to create a chart if all the data are printed onto the chart, and readers must look at the data to learn anything from it. Imagine the above chart without the data, and you'll see why the data labels are critical to this chart.

Below is a version in which I removed all the data labels, replacing them with an axis: 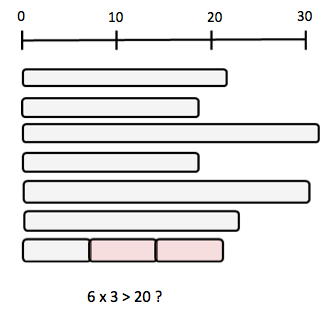 The two pink slabs were thrown in for a little chart-check. According to the designer, 6+6+6 is larger than 20. How is this so? Look at a blow-up of the "God says otherwise" bar of hearts:

The one whole heart in each bar ruins the string of half hearts. Little things can introduce infidelities into charts.

I agree that the chart does not meet the self-sufficiency principle, but I don't agree with your interpretation that the scale is distorted. Showing the full center heart is not a problem. All of the hearts are half-overlapped, the side of the overlap just changes in the center.

In your final illustration, the index for each heart should fall at the center of the heart. Then the graph properly represents six. For your area illustration to work, each bar would have to be overlapped with the subsequent bar. I believe this is only a consequence of using a finite area icon to represent an infinitesimal point. The icons are particularly large, in this case, but it's not possible to avoid this problem in any graph that uses points instead of lines. The thickness of the point will extend beyond the value represented.

Let me know if I've missed your point.

Let's just agree that it's a half-hearted attempt at clever.

Thanks for your response. I do see what you are getting at, and I don't disagree with you. If the chart is perceived as a bar chart, which people are apt to do and perhaps even what the author intended, the graphics are not proportioned correctly. The author's choice to use such large icons, in representing such small counts, definitely distorts the perspective.

While we're critiqueing the chart, why not order the response categories? It's presented in the order that the questions appeared in the poll, but ordering by number of votes makes more sense.