Too much art, not enough science in infographics

Note: I contributed the following post to Statistics Forum, which is a new blog sponsored by the American Statistical Association (ASA), curated by Andrew Gelman.

A reader from Twitter @meprieb suggested that I discuss a particular set of "infographics", one of which is shown below: 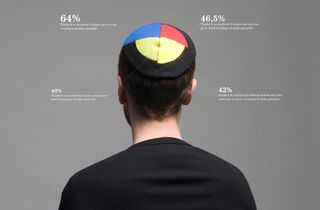 This chart is unquestionable easy on the eyes, and engages our brain cells. The use of a real-world object to simulate a pie chart is cute and even ingenious. According to the description at PSFK, the data tell how "Danish people feel about publicly wearing religious symbols".

The key to reading this chart is to read it as an illustration, an art piece. The fact that this is described as "infographics" reveals a wide divide between the artists and the scientists who work in visualizing data.

This chart fails completely as data graphics. The size of the pie quadrants has no relationship with the data at all, and the four percentages on the chart add up to much more than 100%, and obviously not proportions. The same problem plagues every one of these charts in the set.

Further reading: Andrew Gelman has recently made comments about the divide between the statistical graphics and infographics communities here.

The Gelman link you provided was to the blog homepage, not the particular posting. When I searched on infographics, the result most relevant was from a year ago. That is hardly "recently" -- maybe you had another posting in mind????

Thanks for your continuing efforts. I enjoy your blog.

It's not the angle of the pie wedges, but the relative diameter or area of the inside colored section to the whole wedge, that encodes the variable. But yeah, not real effective, except for showing which percentage is greater, in case you can't read the numbers.

MsJulie: Here is the most relevant link from Jan 2011

Well, given the chosen representation I would even assume that the creator of the "graph" never intended to create a data graphics. As long as the perceived areas and annotated figures are not discordant, the creator should get away with it.

I guess the percentages add up to more than 100% because each respondent was allowed to say "yes" to more than one question. The answers were probably NOT mutually exclusive.

Samuel: you're surely right about allowing multiple responses. one should never use a pie chart for such data!