Gelman joins in the fun

The offending Economist plot is the donut chart, which is a favorite of that magazine.  I commented on this type of chart before.

Andrew created two alternatives, one is a line chart (profile chart) which is often a better option (despite the data being categorical), the other is more creative, and the better of the two. 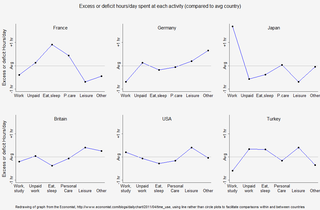 Some of Gelman's readers complained that he arbitrarily "standardized" the data by indexing against the average of the countries depicted; one can further grumble that a 50% "excess" may sound impressive but it would be equivalent to less than an hour, perhaps not as startling. These types of complaints are fair but do realize that blog posts like these are primarily concerned with how data is best visualized. If one prefers a different indexing method, or a different set of countries, or a different color for the lines, etc., one can easily revise the chart to reflect those preferences.

In this particular case, the line chart makes it harder to understand the facts - the shape of the line graph attracts our attention and we look for meaning where there is none.

The second option does throw up some interesting aspects. But you do need to put in some effort to understand the chart and then there could be some 'grumbling'

I think that the doughnut chart does a reasonable job;

- it also shows the difference in personal care in different countries.

Effective enough as far as I am concerned - If a reader want more precise data look up the data labels - they are used in other charts too.

There has been a lot of discussion recently on pie charts / doughnut charts, I have written on the gestalt principle of equilibrium and pie charts at www.visualquest.in , eagereyes.org has an interesting defence of pie charts. Interesting perspective those

I like teh third chart the best - but it would be nice if it stated what the averages were.