Another view of the Indian states

The previous post has elicited protests of "it's not that bad" from some corners. Well, it's bad. Let's look at it from another angle.

We start with the Economist chart, and ask what is the message.

The chart is saying that in 2006-8, there are 10 Indian states that have female-to-male-babies ratios below the world average (the so-called "natural ratio"). For those who know their Indian geography, the chart gives the names of these anomalous states. The chart also tells us among these 10 states, some have been gaining and others have been losing ground when compared to the 2001-3 period. There is no obvious pattern as to which states are gaining, and which losing.

That's pretty much everything that one can discern from this chart.

The problem is, the average Economist reader already knows that in India, as in China and many Asian countries, there are more male babies than female ones than in other parts of the world. If he or she doesn't know this fundamental statistic, the chart does not help because it says nothing about the other 24 states that make up the Indian average.

Worse, the chart raises the suspicion of voodoo statistics. It suggests that the other 24 states have a gender ratio that is at least equal to, if not above, the natural ratio. One would then have to believe that either the overall Indian average is higher than the natural ratio, or the negative deviations from the world average (as shown on the chart) are quite a bit larger than the positive deviations (not shown), or that the states with positive deviations (not shown) are generally less populous than the ones shown.

Either of the last two conclusions, if true, would be interesting because it implies that the cultural norms, typically claimed to explain this anomaly, are entrenched only within certain geographies. Then, it is inappropriate to speak of India's sex ratio, given this variability between states.

As I pointed out in the prior post, with two data series (two observation dates of the same statistic) at their disposal, the Economist chart focuses on the more recent data. This self-imposed restriction obscures meaningful differences between states over time. 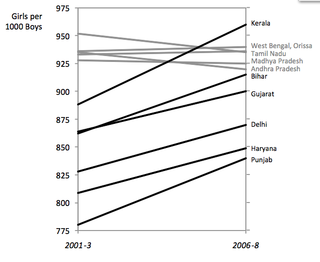 The junkcharts version shows that the current 11 "worst" states could be clustered into two groups: the first group (black lines) has gained ground over the last decade, while the second group (gray) has stagnated, and in some cases, lost ground.

What's more, we learn that every one of the states in the gray group is ranked higher than those in the black group at the start of the decade.

Further, while the distance between the black and gray groups have narrowed over the decade, the gray group, despite the slight decline, is still ranked above the black grup except for Kerala, which has seen dramatic improvement.

Those who know their Indian geography might have further insights as to why the states cluster in this way.

In my view, these findings are much more interesting than the things one can learn from the original chart.

In my late 1970's human ecology classes, I remember that the state of Kerala had a socialist/communist government for quite a while. The government adopted a number of people-focused policies, particularly equality for women and universal elementary education. (I seem to recall their theory of development was that society would be better off if they put resources into ensuring that everyone could read and do mathematics to a 6th grade level rather than investing in higher education for a few). I seem to recall that there were social statistics showing remarkable progress (e.g. smaller family size, which meant greater family wealth), despite being one of the poorest states at the time. An investment in basic education for girls produces women who more successfully engage in family planning.

Thank you for explaining us such a brilliant way of representing the data.I would like to know whether there is any tool that prepares this Graph?