Junk Charts
Welcome Twitter About Book Blog RSS
Charts should not be used as map lessons
Have data graphics progressed in the last century?

Why should charts exist?

That sounds like a silly question. Isn't the answer self-evident? Am I suggesting that we banish the discipline of charting?

Maybe I won't go so far. But it's difficult not to have such a destructive thought when one stares at charts like this: 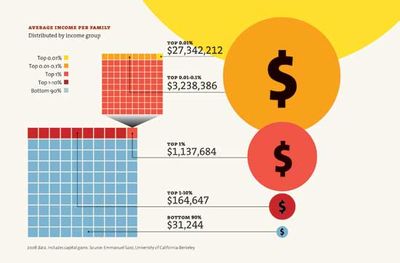 Now, compare the above with this version shown on the right ...

and it's clear all the squares and bubbles and colors gave us nothing. Readers have to read the fine print in order to take in the unequal distribution of income. This chart violates the notion of self-sufficiency we often speak about.

Peering back at the original chart, we find that the entire square grid edifice only serves to explain that 0.01% is one-tenth of 0.1%, which is one-tenth of 1%, etc. On the other hand, the part that has a chance of conveying the main message -- the relative size of the biggest bubble versus the smallest bubble -- is shoved off the screen. The gigantic yellow bubble being mostly off the chart, readers are essentially asked to read the data labels.

The same article (via Yahoo!) contains other charts that are well executed.

This one, for instance, shows the increasing inequality very well. (The legend is on the left panel which I did not include here: the top red line is the top 1%, the other five lines are the quintiles or 20% buckets). At least four-fifths of the country is worse-off now than in 1980 in terms of their share of after-tax income. 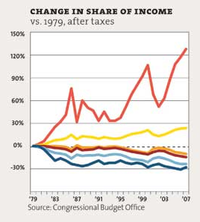 Good point. Too many people seem to think that they can create an infographic simply by slapping some brightly coloured graphics on some dull statistics.

A genuine infographic not only illustrates the information but draws it out, so as to make it clearer and easier to comprehend. Infographics are particularly good at demonstrating relative relationships. You should be able to look at an infographic and get an immediate insight into the structure of the underlying data without reading every statistic in detail.

Nice article, thanks for the information.

As I often say, it's not enough for an information graphic to be better than nothing: the floor of performance is that it should be better than the table it replaced.

There is one or two issues I would like to point out about the "Change In Share Of Income" and it's corresponding/sister chart "Average Household Income: before taxes" that initially bothered me - which originally came from the Mother Jones article (which is in and of itself an interesting read).

If you read the accompanying article it really tries to tie in the change in income discrepancies with the downfall and marginalization of unions - kind of ending in the 1970's from their peak in the previous years.

The first issue I have with this chart is that if you look at the base year starting in 1979 it suggests that this is when things started to go wrong (which is one of the articles main points) - however if you look at the historical data the trend has been there for a long time.

The use of taking the top 1% really minimalizes the rest of the relationships in its sister chart "Average Household Income: before taxes".

Third, I would even suggest that if we swapped the indicator names with something more benign/less political that this data (top 1%) would be an outlier especially since everything else is in 1/5 increments. And as I've not run the numbers myself it would be interesting to see what these charts would look like with the bottom 1%.

Anyway just some food for thought.