Junk Charts
Welcome Twitter About Book Blog RSS
From text documents to our eyes
Light entertainment: Japan on a chart

The chart that reveals a mysterious death

I agree with Business Insider that the following chart is attractively drawn. It nicely illustrates the rise and fall of various music media over time. 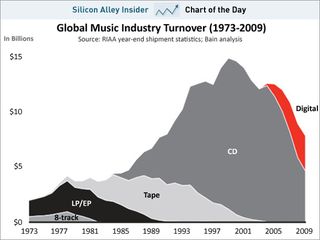 Area charts are more visually appealing than line charts, largely because line charts frequently leave large patches of white space. But one should be aware of some shortcomings of area charts.

Notice that the outer envelope of the area chart represents the growth in music sales across all media, not to be mistaken for the growth of any particular media. However, the primary message of this chart relates to the change in mix among different media, not the growth of the total market. Because of the stacking of different areas on top of each other, it is not an easy task to read the growth of any individual piece, such as CDs.

Unlike Business Insider who found some answers on this chart, I find that this chart raises a mysterious -- and important -- question: what happened around 2001 to damage CD sales? Since according to this chart, digital sales didn't really show up till 2004-ish, there is a gap of two years or so when CD sales dropped drastically, seemingly of its own volition.

That must be when Napster (and others) came on the scene, and lots of people began peer-to-peer exchanging of ripped music files.

Napster and illegal downloading kicked off around 2000-1.

The industry didn't get its act together for a number of years after that. So in answer to where the CD sales went: to illegal downloads.

Peer-to-peer file sharing became popular with Napster being released in 1999, Kazaa in 2001, and BitTorrent, also in 2001.

We might be able to tell if the Digital Sales area was not hidden behind the CD Sales area. Hence the problem with area charts.

Digital sales isn't hidden behind the CD sales - its stacked on top. I know it looks like a range of mountains, but it isn't. I think. That's the perceptual problem with charts stacked like this.

Before people get carried away with armchair conjecture, please do some research. P2P networks have been found to have zero affect on CD sales, specifically around the times we are talking about here.

It woudl nice to see the areas redone as proportions, rather than totals.

Around late 90's is when CD back-list replacement sales started to slow; those folk updating LP/tape libraries to CD were filling up.

Also not much in the way of compelling new material, and (as pointed out by others) the beginning of mp3 culture among the young.

For a good overview, read Appetite for Self-Destruction (a book no less, link is to hardbound, paperback also avail http://www.amazon.com/Appetite-Self-Destruction-Spectacular-Industry-Digital/dp/1416552154 )

The first iPod was also released in October 2001.

The new data should come in from the bottom rather than from the top -- currently growing trends incline downwards in this version.

A major effect would be the availability of cheap CD writers. Probably the most influential effect on sales, other than piracy, would be the economy. The 90's was the dot com bubble and money flowed freely. Since then the American consumer has had less and less disposable income.

While I haven't checked the figures, the idea that CD sales were driven by people replacing LP is unlikely to be true. A high proportion of music sales is always new music.

Money flowed easily until at least 2000, yet album sales flatlined in the late 90s - singles, OTOH, a different story, as the RIAA members tried to force all to buy albums instead - singles sales have never recovered - perhaps will in digital, but only if the RIAA sends a few students to jail

While a high proportion of sales is "new music", there has also been lots of library replacement - 3 times so far: LP/45, cassette, CD, and now digital - same as in VHS-to-DVD changeover - and they're trying the same with BluRay and then digital

As a 40+ year worker in the biz (pix, not music), let me only mention that the backlist has for many years been the difference between profit and loss - take away ANY of the RIAA or MPAA backlists and all you have left is bupkus

also the chart on top of this post is $, not units - part of the problem is changing prices, rising through the entire period at least until 2000, and the not so transparent RIAA figures, which are not open to public audit

Of course, none of this is about the visualization of the data - sorry to be so OT

Well, why is digital on the decline? What mysterious series are we missing there?

When did DVD sales start to pick up? From what I recall, around that time. The entertainment expenditure had to come from somewhere, not just updating VHS collections.

Quoting from the Ars Technica article cited by "Unattended":

So what's the problem with music? The study echoes many of the observations you've read here at Ars. First, because the recording industry focuses on units shipped rather than sold, the decline can be attributed in part to reduced inventory. Gone are the days when Best Buy and others wanted a ton of unsold stock sitting around, so they order less CDs. The study also highlighted the growth in DVD sales during that same period as a possible explanation for why customers weren't opening their wallets: they were busy buying DVDs.

And I came to complain about this graph.

That is, I hate these area charts where your brain wants to think there are mountains behind mountains...but there aren't, and we're not good at subtracting the heights from one another.

So what does the CD line look like all by itself? What is we normalize? Are the variations in CD sales any bigger than those in other media.

And by the way, are these adjusted dollars?

Well, why is digital on the decline? What mysterious series are we missing there?
That's the problem with the chart, the area of the red digital section is actually getting larger but the steep overall decline serves to obscure this trend. As a previous comenter noted bringing the new values in from the bottom would address this problem a bit on this chart. Also the top line - overall sales - could be strengthened visually unifying all the subvesctions to empasise that this is overall figures. But yeah, the chart is flawed and the lack of information about whether this is inflation adjusted is really a killer.

@Tom, Tomp, John.
I agree this chart is misleading as well! As with all area diagrams, proportionality plays a key role. It seems as if the chart was created with a line plot and areas under the curve were the just colored. This draws your major attention to CD sells as though it takes up the majority of the picture. CD sells were actually only 3 times larger than their earlier counter parts with no adjustment for inflation. Digitial sells seem to be just as high but are only devoted a small amount of area. YIKES, this graph is misleading!

Great critique of that chart and a bunch of others to explain the downfall of the industry here:

The Business Insider link is interesting, but still leaves much hidden.

((Also re the chart at the top - I just relooked (it's larger on BI page, so easier on these old eyes) - it's Global, not US - lots of comments have been about Napster, etc. - why important on US side, not so sure had as much impact ex-US in 1998-2001 - don't want to start a discussion of 'net penetration, but I do faintly remember that much of the ex-US was not exactly wired up back then))

Back to our current discussion

If anyone wants to do a deeper analysis, here's some info sources:

"Moses Supposes" has an interesting chart, although graphics perhaps not up to this site's standards - difference between (what appears to be, not stated on chart) units moved per RIAA figures and those from Nielsen SoundScan (retailer reports) - notice that the RIAA figures come close but do not line up with those on the RIAA PR piece above
link is to blog post, Tinyurl for space http://tinyurl.com/49y2olj

Last but not least, "Stop Music Theft" is to my mind an astroturf site, but the About page claims it isn't - well, in this case, doesn't matter - what's interesting is another chart, this one from the RIAA's chart engine (on the RIAA site, $75/yr to access) - it's unit sales, and I have a feeling Junk Chart readers will be amused to see that it appears to tell the reverse story of increasing sales, somewhat confusing for an RIAA shill - however, once again, no $, but the next chart on the page shows a falling-off-the-cliff $ pattern as far as the eye can see into the future - love it - these guys need your help
link is to site page http://www.stopmusictheft.com/unit-sales

And one should not forget that the real $ to the music majors is publishing, not sales - if you were to let Citibank keep the EMI publishing, they might even give you the operating company for zip

bp, fatbear: I wrote a long comment here a few days ago but through the miracle that Typepad is, it seems to have disappeared. Anyway, will try again.
The new Business Insider post is a must-read because it shows the direction for a proper analysis of the data. However, that analysis itself has problems. My takeaways are:
- the new chart has even more mysteries because with the adjustments, even the collapse of cassettes isn't explained well by the rise of CDs.
- it's almost as if the real factor driving the rise and fall of different music sales is hiding behind the chart. The conclusion one draws is that media format has a small impact but maybe the economic cycle has a larger impact?
- if the underlying message is that piracy explains the gap, then one ought to estimate the pirated sales and put it on the chart.
- I note that the data came from RIAA, which is hardly a neutral player in all of this. Should bear this in mind when reading such charts.
- I'm uneasy about using the CPI to adjust for inflation. The underlying question is: how much music could be bought in 2009 using $47 worth of music in 1973? The CPI is an average rate based on a basket of goods, only part of which is music. It would be better to use an index of music prices, or prices of entertainment goods because I don't think the trajectory of prices of music goods is like the trajectory of the average prices.

So fun article is! I know more from it.