From text documents to our eyes

Today we look at an example of a powerful visualization of some unstructured data. The data team at Guardian (UK) organized the Wikileaks data concerning reported incidence of IEDs in Afghanistan. 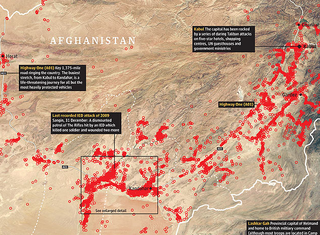 A scatter plot on a map provides an overview of the intensity of attacks from a spatial perspective. (A part of this map is shown on the right.) The background data -- the relief map of Afghanistan, and the major thoroughfares -- add to our understanding of why attacks were concentrated in certain parts of the country. It is always a great idea to add (con)textual data to help readers grasp the information shown on the chart.

Readers may want to understand the temporal pattern of attacks as well. The designer chose a small-multiples format to show this data, disaggregated by year of occurrence. This graphical construct is very versatile, and illustrates this data well... even though there has been little change over time, apart from a general increase in the number of reported attacks across the country.

It is a good idea to track the total number of attacks over time -- but not with those bubbles! The bubble chart almost always fails the self-sufficiency test; our eyes are not  equipped to read relative areas of circles, and so any information we obtain about the aggregate number of attacks comes from reading the data directly. Switching to a bar chart, or removing the bubbles, leaving just the data, is recommended.

The major problem with a dataset like this is reporting bias: only attacks that were reported by U.S. personnel were included. The following chart helps close the gap a little by also showing the number of defused attacks, reported in the U.S. database. I'd have preferred a stacked column chart here since the total of defused (gray) and detonated (red) IEDs is an interesting statistic.

A stock trading volume type chart would also be nice, something like this: